A U.S. Department of Agriculture (USDA) National Institute of Food and Agriculture (NIFA) Organic Transitions grant is funding a study of management options for center rot disease in organic onion production in Georgia and Michigan. The study is headed by University of Georgia Cooperative Extension plant pathologist Bhabesh Dutta and researchers from Michigan State University.

The three-year grant, valued at $498,793, supports a collaborative project between UGA and Michigan State University. Scientists at the two institutions are exploring alternative methods to control center rot, with regards to weed and thrips management, along with sound cultural practices.

“There are some growers who are trying to transition some of their acreage into organic farming. But there are challenges in organic agriculture, especially with weed, disease and insect issues and the limited availability of options to manage them,” Dutta said.

Center rot is the most challenging issue that conventional and organic onion producers encounter. Its symptoms consist of white streaks with water-soaked margins along the length of the leaf and soft rotting of the bulbs. Although the pathogen was initially confined to the Vidalia-growing region in southeast Georgia, it has moved into most onion-growing regions in the country, specifically Colorado, Michigan, New York and Pennsylvania.

Because of the complex nature of center rot and the lack of chemical treatments for organic farmers, UGA is evaluating different management options for three inoculum sources of pathogen: seeds, weeds and thrips.

Physical and biological treatments of organic onion seeds will be studied in the hope of eliminating the seedborne inoculum. If the pathogen populations are eliminated from infested seeds, this will reduce or delay center rot, Dutta said.

Cultivation is a reliable method of weed control in organic crops. In a research trial this year, Dutta, Grey and Johnson compared onion plots that were cultivated with a tine weeder to noncultivated control plots. Incidences of center rot were significantly lower in the cultivated plots.

Managing thrips is key because the pests can transmit the pathogen to the onion crop. Since traditional insecticides aren’t used in organic systems, promoting a diverse group of natural enemies is important to organic farmers. Schmidt and Szendrei will document the predators and parasitoids in Georgia and Michigan to gain a better understanding of which organic pest management practices work best.

Another method of center rot control being researched is the use of organic fertilizers, according to Coolong. Many growers use chicken litter-based fertilizers or fertilizers that release nitrogen over an extended period of time. In conventional farming, growers usually stop applying fertilizer late in the season, but that may not be possible in organic production.

“There’s some conventional research that shows that high nitrogen late in the season can lead to increased center rot. We think we can do some work with organic fertilizers to help refine our application windows … to reduce the susceptibility to it,” Coolong said.

Organic production has increased considerably across the U.S. According to the 2014 National Organic Survey, the value of organic products in the U.S. was $5.5 billion, up 72% since 2008. Georgia ranks among the top 13 organic-producing states with organic certified and transition land acreage of 9,603 acres and commodities valued at $19.6 million per year. 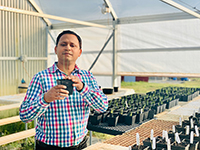