University of Georgia vegetable horticulturist Tim Coolong received the Donnie H. Morris Award of Excellence in Extension during the Southeast Regional Fruit and Vegetable Conference in Savannah, Georgia, on Jan. 12.

The annual award is presented by the Georgia Fruit and Vegetable Growers Association (GFVGA) to a UGA Cooperative Extension employee for contributions made to the Georgia fruit and vegetable industries and is named for Donnie Morris, a blueberry grower in Baxley, Georgia, and past president of the association. Previous awardees include UGA scientists Phillip Brannen, Stormy Sparks and Stanley Culpepper and agents including Justin Shealey in Echols County, Georgia, and Stephanie Hollifield in Brooks County, Georgia.

Coolong has worked with more than 25 different vegetables, ranging from popular crops like watermelons and peppers to obscure commodities like kalettes, a cross between kale and brussels sprouts. Before Coolong joined the UGA Tifton campus in 2013, Georgia’s farm gate value for vegetables was $935.5 million for 2012, according to the UGA Center for Agribusiness and Economic Development. In 2016, the farm gate value for vegetables was $1.1 billion.

“There were a couple of things when I came in that I wanted to focus on. We had not had a vegetable specialist in that position for about four years, so I wanted to make sure I was able to get back out there in front of the growers and provide a service for them,” Coolong said. “The other thing that I spent a lot of time on was establishing a variety screening program. We really didn’t have many strong relationships with the vegetable seed companies and their breeders. That was my top priority when I started — to build those relationships and start a program. I think we were successful with that.”

In 2018, Coolong moved to the UGA Athens campus, where he now focuses on organic vegetable production.

Since joining the vegetable pathology program at UGA-Tifton in 2012, Dutta has been part of multiple research projects that have impacted Georgia vegetable producers. He provides growers with management options for multiple fungal, bacterial and viral diseases in vegetables, as well as leading a national effort on center rot, an important bacterial disease of onions. Dutta also led a project to improvement the management of botrytis leaf blight in onions through early- and late-season fungicide spraying.

Curry, who has worked in UGA Extension for 12 years, has participated in blueberry research that has helped propel Georgia to the top of the national rankings in blueberry production. Appling County, where Curry has worked for the past seven years, is the third-largest blueberry-producing county in Georgia.

Through research trials with UGA specialists in Appling County, Curry found that using soil fumigants and the addition of pine bark mulch when blueberry bushes have to be replanted helps to fight pests, especially nematodes — microscopic parasites that attack plant roots.

Curry also is part of a coordinated effort between Extension agents and specialists to research blueberry leaf rust, a foliar disease that causes small spots to appear on blueberry leaves.

For questions about fruit or vegetable production, please visit http://extension.uga.edu. 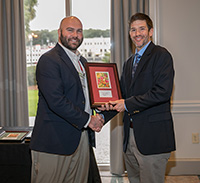