Silverleaf whiteflies devastated Georgia’s cotton and fall vegetable crops last year. In response to this crisis, a team of University of Georgia College of Agricultural and Environmental Sciences research and UGA Cooperative Extension specialists is studying the pests statewide to help cotton and vegetable farmers avoid another year of disappointing crops.

“Teams are an important part of UGA. Many of the issues agriculturists face today require a collection of scientists from differing disciplines with differing expertise to address complex issues. The silverleaf whitefly fits the bill here,” said Phillip Roberts, UGA Extension cotton and soybean entomologist and Whitefly Team member. “Not only are whiteflies a direct pest of plants as a result of feeding, but they also transmit several viruses to vegetables that can have a devastating effect on virus-susceptible crops.”

UGA Extension established the UGA Whitefly Team, and each team member brings a specific area of whitefly expertise. In addition to Roberts, the team includes:

The mild winter of 2016-17 enabled whiteflies to continue to feed on plant hosts and become a major nuisance for cotton growers in the early summer of 2017.

Fortunately for Georgia farmers, whitefly populations are considerably down when compared to this time last year. A colder winter, including several hard freezes in January, eliminated the reproductive host plants, like cultivated crops and weeds, on which whiteflies feed.

“We’re not seeing any significant outbreaks of viruses yet. It was probably June or July when we saw that last year, right at the end of the spring crop,” Sparks said. “Last year, we had growers who were treating whiteflies in the middle of winter on some of their winter crops. On the spring crops, they were being treated by mid-May. Right now, it’s nothing like we experienced last year.”

Whiteflies cause feeding injury issues in vegetables and transmit two new viruses: cucurbit leaf crumple virus and cucurbit yellow stunting disorder virus. Vegetables like squash, zucchini, cucumber, cantaloupe and snap beans are highly susceptible to these viruses. Commercial cultivars that have resistance or tolerance to these pathogens are not available.

According to the UGA crop loss estimates, these viruses caused between 30 and 50 percent of squash and cucumber crop loss and nearly 80 percent of snap bean crop loss in fall 2017.

Dutta and Coolong screen different cultivars and germplasms, and they advance breeding lines of squash, snap beans and zucchini for cucurbit leaf crumple virus resistance. They hope to find resistance lines for the viruses that whiteflies transmit.

Barman, a postdoctoral researcher under Toews, set yellow sticky traps at 125 field sites across southern Georgia to detect whiteflies. Each week, Barman and his colleagues drive more than 800 miles to collect and replace traps in 24 different counties. The traps are located as far west as the Georgia-Alabama border; as far east as Vidalia, Georgia; as far north as Cordele, Georgia; and as far south as Thomasville, Georgia.

He will also provide weekly updates on whitefly numbers through an interactive, online map, which will allow the UGA Whitefly Team to monitor any whitefly hot spots throughout the growing season.

“We need to watch for them in the next three months. For the most part, in Tift and Colquitt counties, it’s not a matter of if they’re going to show up, but when,” Sparks said.

For more information about whiteflies, contact your local UGA Extension office at 1-800-ASK-UGA1. 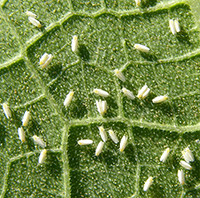 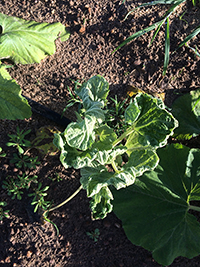 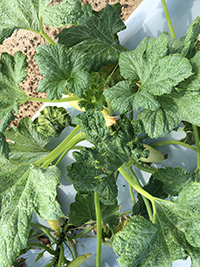