June’s heavy rains meant that many Georgia farmers were able to cut back on irrigation, but the rain also contributed to fungal diseases in vegetable crops and hampered vegetable farmers’ harvests.

The clouds associated with this rain have kept the temperatures cooler, but some farmers are still trying to plant their last acres of crops. Some fields in low-lying areas have flooded. Irrigation is still needed in areas that missed out on the rain, and some dryland fields are still suffering from drought.

The highest daily rainfall total recorded by a Community Collaborative Rain, Hail and Snow Network volunteer was 6.14 inches near Lake Park, Georgia, in Lowndes County on June 7, followed by 5.65 and 5.63 inches measured by observers in north Decatur, Georgia, in DeKalb County on June 21.

All three observers noted how heavy the rain came down. The highest monthly total was 16.21 inches, which was measured near Kingsland, Georgia, in Camden County, followed by 14.93 inches recorded by the Lake Park observer.

Drought steadily decreased throughout June. There is a tiny patch of moderate drought left in White County, Georgia, and a few remnant patches of abnormally dry conditions elsewhere in the state. Those are expected to be eliminated in the first U.S. Drought Monitor map for July.

Cloud cover and rain kept June cooler than normal across much of the state.

In Alma, the monthly average temperature was 79.6 degrees Fahrenheit, 0.1 of a degree below normal.

The outlook for July shows that Georgia has an equal chance of near-, above- or below-normal temperatures in the northern half of the state and a slight tendency toward higher temperatures in south Georgia. Wetter-than-normal conditions are favored statewide throughout the month. Rainfall may be dependent on effects from weather based in the tropics, which is expected to be more active than normal.

For more information, visit the “Climate and Agriculture in the South East” blog at blog.extension.uga.edu/climate/ or gaclimate.com. Please email your weather and climate impacts on agriculture to pknox@uga.edu to share on the blog. 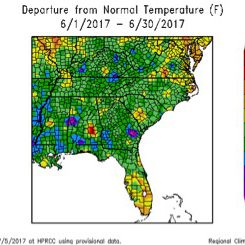