On June 1, 1991, the first agricultural weather station operated by the University of Georgia began transmitting data from Griffin, Georgia. Since then, the UGA Weather Network has grown to include 87 stations scattered across the state, providing weather data to a variety of users. On June 1 this year, this 30-year record of continuous weather data makes the UGA Weather Network one of the oldest state weather networks in the country.

The network, originally known as the Georgia Automated Environmental Monitoring Network, was the brainchild of Gerrit Hoogenboom, an adjunct professor in the Department of Biological and Agricultural Engineering at the UGA College of Engineering. He placed the first four stations at UGA facilities around the state  — in Griffin, Tifton, Midville and Watkinsville — and directed the network until 2010. He was followed by Ian Flitcroft, who retired in 2018. Hoogenboom, now a professor and preeminent scholar at the University of Florida, still uses the UGA weather data as inputs in his ongoing Decision Support System for Agrotechnology Transfer (DSSAT) training classes that are offered each summer on the Griffin campus.

“One of the main goals of the network when it was initiated was to be able to provide access to near real-time weather data for the main agricultural regions across Georgia. That's why we installed an automated weather station first at each of the Research and Education Centers,” said Hoogenboom. “We were also interested in observing variables that are important for agriculture beyond temperature and precipitation, including solar radiation, relative humidity, wind speed and direction, soil temperature at different depths, and pan evaporation. Since installing the weather stations another goal has been to add value to the collected weather data by providing simple decision support systems for degree-days, chilling hours, etc.”

The network also played a major role during the 1996 Olympics when stations were installed at six Olympic venues in the state, including the whitewater canoeing venue in Tennessee and around Georgia in Conyers, Savannah, Gainesville and Jonesboro to provide information four times per day on sky conditions, visibility, temperature, dewpoint temperature, pressure, wind speed and direction, and rainfall amounts.

“The weather data were used by the National Weather Service for now-casting during the Olympics,” Hoogenboom said. “The assimilation of the additional surface weather data by the forecast models proved to be a key factor in improving the accuracy of the forecast products and achieving the National Weather Service's goal of providing both real-time weather information and spot forecast products in support of the summer games.”

By 2000, the network had grown to 36 stations, and now includes 87 stations around the state, plus a legacy station in Costa Rica at a former UGA facility there. Most of the stations are located in agricultural areas and measure not only weather information like temperature, precipitation, wind speed and direction, and humidity, but also agriculturally important variables like solar radiation and soil moisture and temperature at three levels.

Information is collected every 15 minutes and disseminated through the UGA Weather Network website. A number of tools to calculate chill hours, degree days and evapotranspiration are also available online. Some historical data is made available through the website, but additional information can be requested by emailing aemn@uga.edu.

Farmers and UGA Cooperative Extension agents use the information to help determine when to plant crops and to monitor crop development. The information is also used by the Georgia Forestry Commission to augment fire-monitoring activities and by conventional and solar utilities to assist with load forecasting and to help place new equipment.

The network is funded through UGA, grants from several commodity groups and data sales. UGA supports the work of three full-time personnel, including Pam Knox, agricultural climatologist and director of the UGA Weather Network, plus a half-time technician and a data specialist whose positions are supported by data sales. These team members visit and maintain the stations regularly, calibrate equipment, quality control data, and even mow the grass to make sure the stations are reporting accurate information.

The National Weather Service is currently the largest purchaser of data from the UGA Weather Network. The network data are used to augment the National Weather Service network of airport stations and cooperative observers to provide real-time information that is used when severe weather or flooding rains threaten the state. In 2018, the station at Donalsonville, Georgia, reported a wind gust of 115 mph in the eyewall of Hurricane Michael. In 2019, the station at Cairo, Georgia, was narrowly missed by a tornado that passed less than 400 feet from the station — the station recorded a peak wind gust of 102.5 mph when the storm moved through the area. In 1994, the station at Fort Valley recorded 13.72 inches of rain on July 5, 1994, during Tropical Storm Alberto.

With 30 years of data in hand, the network group is in the process of creating climate summaries of the data available from the longest-standing stations. This data will help agents and farmers plan for future growing seasons and assess trends in weather variables over time and will be provided to users in the future through the website and in UGA Extension publications.

“The UGA Weather Network appreciates the support of commodity groups, farmers and Extension in providing high-quality, useful data to growers and others,” said Knox. “We look forward to continuing network operations for many years to come.”

More information on the UGA Weather Network is available at weather.uga.edu. 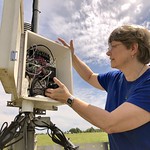