During the Southeastern Hay Contest at the 2019 Sunbelt Ag Expo, Georgia hay producers have a chance to compare the quality of their hay and win cash prizes.

Any producer in Georgia and other Southeastern states including Alabama, Arkansas, Florida, Kentucky, Louisiana, Mississippi, North Carolina, Oklahoma (east of I-35), South Carolina, Tennessee, Texas (east of I-35) and Virginia can submit a sample, but entries must be submitted by the farm where the forage was grown.

A grand prize winner of $1,000 and the use of a Massey Ferguson RK Series rotary rake or a new Massey Ferguson DM Series Professional disc mower for the 2020 hay production season will also be announced.

“From an Extension point of view, the purpose of the contest is to encourage producers to test their hay samples. Regardless of whether they win or not, that’s going to help them to know how they need to feed that hay in the winter,” said Lisa Baxter, University of Georgia Cooperative Extension forage agronomist. “It can save them money down the road.”

For those farmers interested in learning more about taking a hay or baleage sample, see this Massey Ferguson instructional video.

While all farmers should regularly test their hay, Baxter admits that not all do. This contest provides added incentive for all hay producers.

“It does cost to submit a sample to a UGA lab or other labs and to enter the contest, but when you consider what that could save you this winte,r and knowing how you need to feed that hay, it generally pays for itself. This is especially true in a year like this where we run a risk of high-nitrate or low-quality forage. That $20 hay sample is a lot cheaper than what it would cost to replace an animal,” Baxter said.

Nitrates refers to nitrate ions in the forage, which can kill forage animals. This happens when farmers apply too much nitrogen in anticipation of rain, which would promote regrowth and lower nitrate levels. However, rains were sparse this summer and nitrate levels will peak immediately following a rain event. Although producers may be tempted to turn animals onto the forage or cut hay/baleage, they should wait a minimum of seven days from application to allow the nitrates concentrations to decrease, Baxter said.

“What’s going to throw a lot of people out this year are the nitrates. You could have the best sample in the world, but if it’s more than 5,000 (parts per million nitrate-to-nitrogen), you’re immediately disqualified,” Baxter said.

Also at stake this year is a cash prize for the Extension agent responsible for submitting the most samples.

The winners of this year’s hay contest will be announced at the Sunbelt Ag Expo in Moultrie, Georgia, on Tuesday, Oct. 15. 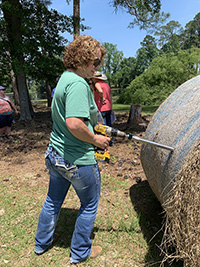