Georgia's peach crop in good shape after two down years

Georgia peach farmers are feeling “peachy” about the outlook for this season’s crop, which is expected to more than double last year’s volume, according to Jeff Cook, University of Georgia Cooperative Extension Agriculture and Natural Resources agent for Peach and Taylor counties.

The state’s three biggest peach growers, all located in middle Georgia, are projected to sell more than 2.5 million boxes this year, compared to just 1 million in 2018, Cook said.

“We’ve had a big crop,” he said. “Overall, the quality has been good. The quantity has been really good. Everybody’s really happy.”

Among peach farmers feeling content with this year’s crop is Lee Dickey, who experienced a disastrous 2017 harvest.

“We had probably the worst crop in 30 years in 2017. Last year was fairly challenging as well — we had about half the normal crop. It was refreshing to get some good volume in this year,” said Dickey, who farms 1,000 acres of peach trees. “I would say overall, it was a pretty good crop.”

Like Dickey, all Georgia peach growers endured a difficult year in 2017. A mild winter led to an 80% loss of the state’s crop. Cook estimates that approximately 70% of those losses were attributed to a lack of chilling hours.

Peaches need chill hours with temperatures between 32 and 45 degrees Fahrenheit to mature. The required chill hours depend on the peach variety, but most growers hope to get around 1,000 chill hours.

Georgia farmers have thrived this year despite unpredictable weather.

Dickey said a late freeze in the spring damaged some of his early varieties. Peach trees bloom in early to mid-March, so late-season freezes can damage crops.

This season, temperatures dipped below freezing for a few nights during bloom, but the overall damage was minimal, said Cook, although the late freeze led to some disease issues, like brown rot.

“The rain and wind and things like that caused some bacterial spot problems that got to be an issue in places and on certain varieties, but for the most part the weather was fine,” Cook said. “It got a little hot and dry there for about three weeks in June, but once we got past that and started to get a few showers and sun, things got back to normal.”

While Mother Nature was unpredictable, prices are as expected. This year prices have been holding at 75 cents per pound, a little lower than the 80 to 95 cents farmers got the past two years. 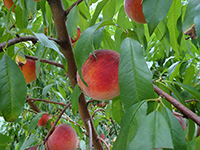