Georgia temperatures are rising, and the weather is only going to get hotter with little rain in the forecast. That’s not good news for Georgia’s cotton producers who are in the middle of planting this year’s crop, says Jared Whitaker, University of Georgia Cooperative Extension cotton agronomist.

According to the UGA Weather Network at www.georgiaweather.net, temperatures eclipsed 90 degrees Fahrenheit in most of south Georgia this past weekend and are expected to reach 100 F by the middle of next week.

“Cotton is going to be the most sensitive crop to these types of conditions just because of the relatively poor vigor of cotton seedlings compared to other crops Georgia producers plant,” Whitaker said. “Cotton seed is very small and conditions need to be near perfect for several days after planting to ensure we get a suitable stand. When soils dry and temperatures rise, it becomes increasingly difficult for producers, especially in nonirrigated fields.”

Whitaker says that an informal survey he conducted last week revealed that around 50% of the state’s farmable fields had been planted. Progress was a little further along than usual because of good planting conditions in late April. Also, producers are trying to minimize their risk from losses that could occur at harvest by planting some cotton earlier than usual.

He is concerned that poor conditions could delay planting to the point that yields are affected.

“We really need to have a good stand established before the end of the first week of June to ensure that we have enough time to make an entire crop,” Whitaker said. Growers need rainfall within the next couple of weeks to get this crop started in the right direction.

“We’re always a week away from a drought,” Whitaker said. “And that’s certainly the case this year.”

The last substantial rainfall was recorded during the weekend of May 10 through May 12. Three days of rain yielded 1.5 inches in Tifton, Georgia; 0.81 inches in Alma, Georgia; 1.2 inches in Griffin, Georgia; and 1.52 inches in Vienna, Georgia.

But since much of the state’s crops are grown in south Georgia’s sandy soils, any moisture that region receives is soaked up quickly.

UGA Extension peanut agronomist Scott Monfort says that approximately 65% of Georgia’s peanut crop has been planted. But like the state’s cotton farmers, Georgia’s peanut producers will need to monitor their crop’swater needs during this extremely hot and dry period.

“To have high temperatures this early is pretty tough. It means these plants are going to go through heat stress earlier than normal this year and farmers are going to have stay on top of it as far as irrigating,” Monfort said. “While we normally wouldn’t irrigate this early, we might have to start if we lose too much moisture.”

Growers also need to be careful planting in fields with marginal moisture.

Summer doesn’t officially begin until June 21. Pam Knox, UGA Extension agricultural climatologist, believes that temperatures in June, July and August will depend largely on how much rainfall Georgia gets.

“There is not much correlation between early season heat waves and the rest of the summer. However, if it stays dry, then hotter-than-normal conditions are likelier just because all of the sun’s heat goes to warming the air instead of evaporating water from the soil and plants,” she said.

For more information about what weather to expect this summer, read Knox’s climate outlook on her blog at https://t.uga.edu/4YB. 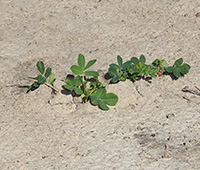 CAES News
The hot air around methane Posted on 12/28/21 by Darren Henry
It is not difficult to find somebody talking about methane these days. Simply turn on the TV, open your computers to your news affiliate of choice or log into any social media platform.
Subscribe for Updates