In agricultural research, scientists across disciplines often find themselves working to address the same issues as colleagues at other institutions. To help advance and streamline this important work, funding from the U.S. Department of Agriculture (USDA) allows land-grant university scientists to work collectively to answer questions with a broad scope.

“It allows us to bring together a critical mass of people to investigate a problem with broad impact or implications,” said Joe West, assistant dean on the UGA Tifton campus. “Rarely does one institution have the resources or scientists to address a broad issue from multiple different angles. The projects generally have multiple objectives and scientists from participating institutions contribute to the issues they can address, so each project has a varying degree of participation from member institutions. Thus, you are able to muster the resources from all over the country.”

Approximately 2.7 percent of all research money generated by UGA CAES in 2018 was dedicated to multi-state projects. Last year it was 3.2 percent and in 2016, it was 2.5 percent.

West serves as administrative adviser for a project titled “Genetic Improvement of Adaptation and Reproduction to Enhance Sustainability of Cow-Calf Production in the Southern United States,” which has brought together scientists from Arkansas, Florida, Georgia, Louisiana, Kansas, Mississippi, South Carolina, Texas and the U.S. Virgin Islands to research genetic aspects of beef production.

The project investigates beef production issues such as hair coat, thickness of the hair coat, how the animal sheds in the spring and how that contributes to heat stress.

“A variety of breeds of cattle are used because of effects of coloration. White-faced breeds are especially susceptible to pink eye because they reflect more intense sunlight into the eye. These qualities are related to the animal’s adaptation to the environment,” West said. “Diseases interact with the environment, and scientists are working to identify genes that turn on and turn off an animal’s response to the environment. Since environments vary greatly across the country, we include scientists from multiple states.”

The project was recognized for regional excellence (Southern Region) at a recent Association of Public and Land-Grant Universities (APLU) meeting.

West is one of three UGA College of Agricultural and Environmental Sciences faculty members who are involved in multistate projects that received APLU regional recognition.

Gary Hawkins, a CAES scientist who specializes in water resource management, is part of a project titled “Drainage Design and Management Practices to Improve Water Quality,” which focuses on improving drainage management on agricultural lands and was recognized for National Excellence in the North Central Region.

Hawkins is one of 22 land-grant researchers who are developing new technologies and strategies to improve agricultural drainage systems. In Georgia, he is monitoring drainage water and trying to determine, if nutrient levels in the drainage water are high, whether scientists can implement the same bioreactors in southern fields as they do on northern farms or should they modify them to better utilize regional materials to remove nutrients. He is also looking at how scientists use practices such as conservation tillage, different fertilizer technologies or modified fertilizer applications to help plants uptake nutrients better to prevent excess nutrients in drainage water.

“Involving multiple states allows the researchers to communicate what we are doing in a more formal manner, present ideas to each other and learn from each other … ways the same issue may be addressed in different regions of the country,” Hawkins said.

UGA Cooperative Extension vegetable disease specialist Bhabesh Dutta is part of a team of scientists working on a project titled “Biology and Management of Iris Yellow Spot Virus, Other Diseases and Thrips in Onions” that was recognized by APLU for National Excellence in the North Central Region. The research focuses on disease and pest management of onions, production issues in different parts of the country, and marketing issues.

Dutta contributes expertise in disease management of bacterial and fungal diseases of onion, specifically center rot, which is prevalent in different onion-growing regions of the country. The bacterial species that causes center rot in Georgia, however, is different from that found in western or northern areas of the country.

“For example, the bacteria that affects Georgia onions is Pantoea ananatis, whereas the bacteria in Washington or in Michigan is Pantoea agglomerans. The symptoms are similar, but they are caused by different organisms and they survive in different ecosystems,” Dutta said. “Being able to collaborate with other scientists allows us to work together to find a holistic solution.”

USDA support for multistate projects is authorized for five-year terms. Upon completion of a five-year project, researchers submit progress reports. If they seek to continue the project, they submit a rewrite of the project to establish new objectives and procedures to ensure that projects evolve to address new and ongoing issues. 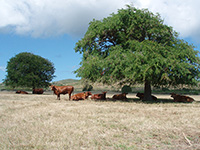