Georgia wet in the west, dry in the east in August 2018

Wet conditions early in the month caused problems for farmers trying to do field work, but the precipitation was generally good for most crops. Some hay production was limited until the end of the month when a dry spell allowed many forage producers to make their last hay cutting of the year. Despite the high humidity and rainfall, disease pressure has been low, but it increased by the end of August. Some irrigation was needed for crops in the eastern half of the state where drier conditions prevailed, but most crops were in good condition at the close of the growing season.

No temperature records were broken in August but Brunswick, Georgia, tied their daily high temperature of 97 degrees Fahrenheit on Aug. 9. This was last observed in 2011.

The highest monthly total precipitation recorded by the National Weather Service was 9.28 inches in Albany, 4.44 inches above normal. The lowest was in Macon with 1.63 inches, 2.47 inches below normal.

Two tornadoes were reported in August 2018 in Georgia. One was a brief EF1 tornado which caused damage near Social Circle, Georgia, in Walton County on Aug. 1; the other was an EF0 tornado in Jones County on Aug. 2, which caused damage in the Piedmont National Wildlife Refuge. There were 16 days in which at least one report of high winds or hail was recorded. Damage from lightning was reported on four days and flash floods or heavy rain were reported on nine days.

In spite of the significant lack of precipitation in eastern parts of the state, no drought or abnormally dry conditions were reported in Georgia in August 2018.

The outlook for September shows that warmer and wetter conditions have a slightly increased chance of occurring. For the September through November period, climate predictions continue to lean toward near-normal temperatures based on a combination of the long-term rising temperature trend offset by cooling from the expected El Nino clouds and rain. Precipitation forecasts show an increased chance of above-normal rainfall this fall.

For more information see site.extension.uga.edu/climate/. Follow us at twitter.com/SE_AgClimate and facebook.com/SEAgClimate. Email pknox@uga.edu to share your weather and climate impacts on agriculture. 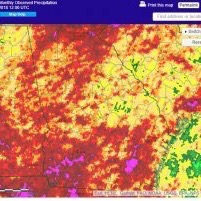