July was fairly wet, but temperatures felt more like summer in Georgia

Despite the heat, farmers were pleased with the rainfall amounts and say they expect very good harvests of crops like cotton, soybeans and peanuts. The heat and high humidity fueled scattered summer thunderstorms, and hail and strong winds caused some damage to fields scattered around the state.

Across the state, average temperatures ranged from 1 degree below normal to 1 degree above normal, depending on the area of the state.

Precipitation was scattered across the state in July.

Because of the adequate rainfall and cooler temperatures, no drought or abnormally dry conditions were reported in the state in July.

High winds were reported on 15 days during July. Golf-ball-sized hail fell near Athens on July 21 and was accompanied by strong winds that toppled many trees in the area.

An EF-1 tornado was observed on Oatland and Whitemarsh Islands near Savannah in Chatham County on July 27. A report is available from the National Weather Service: www.weather.gov/media/chs/events/ChathamCo_Tornado_Jul_2018/ChathamCountyGA_EF1_Tornado_07272018.pdf.

For more information, visit the Climate and Agriculture in the South East blog at site.extension.uga.edu/climate/ as well as Facebook at Southeast Ag Climate and on Twitter at @SE_AgClimate. Please feel free to email your weather and climate impacts on agriculture to share on the blog to pknox@uga.edu. 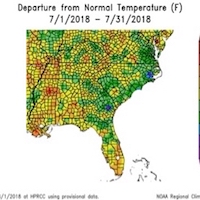