Going into the start of the growing season, a wetter, cooler-than-normal April helped to reduce drought conditions across the northern three-quarters of Georgia, but drought conditions remain in the southeastern corner of the state.

When soil conditions permitted, farmers were busy planting and completing other field work in April, but cool conditions slowed crop growth in some areas.

Ample rainfall enhanced soil moisture and encouraged the growth of crops and pastures, but precipitation caused problems for tobacco transplanting and the onion harvest. The rain also fueled diseases and affected watermelons and small grains. Windy conditions throughout the month created problems for pesticide and herbicide application and caused wheat and oats to lodge, or fall over.

Last month, temperatures were as many as 2.9 degrees Fahrenheit below average in some parts of the state.

The outlook for May, and for the period from May through July, shows enhanced chances for above-normal temperatures.

For most of the state, precipitation was above normal in April.

The highest monthly total precipitation recorded by a National Weather Service station was 6.53 inches in Atlanta, 3.17 inches above normal. The lowest was in Alma, where the station recorded 2.02 inches, 0.79 of an inch below normal.

One daily precipitation record was set this month. On April 23, 4.16 inches of rain fell in Atlanta, surpassing the old record of 2.40 inches set back in 1883.

The police chief of Laurens County, Georgia, reported a tornado on April 7, and two additional tornadoes were reported on April 15 in Decatur County in southwestern Georgia and in Camden County along the Georgia coast. A CoCoRaHS observer reported hail in Lumpkin County, Georgia, on April 27.

Drought conditions gradually eroded over the month as plentiful rains covered most of the state. By the end of April, the area of severe drought in the southeastern part of the state decreased and many other parts of the state saw the drought eliminated altogether.

For more information, please see the Climate and Agriculture in the South East blog at site.extension.uga.edu/climate/, the Facebook page at SEAgClimate and the Twitter page at @SE_AgClimate. Please email your weather and climate impacts on agriculture to pknox@uga.edu. 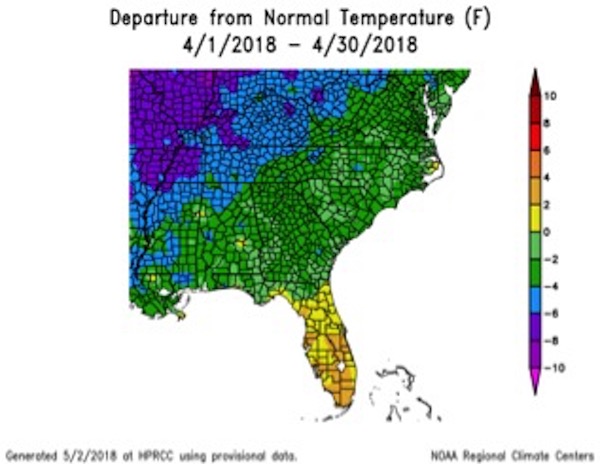