Agriculture — Georgia’s top industry — was featured prominently this week at stops on the University of Georgia Griffin and Tifton campuses during the university’s annual New Faculty Tour.

The tour, which introduces new UGA faculty members to economic mainstays throughout the state during a five-day trip, visited the Food Product Innovation and Commercialization Center (FoodPIC) at UGA-Griffin on Wednesday. On Thursday, the tour stopped at UGA-Tifton, where faculty visited the energy-efficient Future Farmstead home and learned about peanut breeding and dairy research.

Kealey also reflected on his time on the New Faculty Tour two years ago.

“It was the best week I could’ve spent getting to know what happens in Georgia and who the economic leaders in our state are,” Kealey said. “I know this week will benefit these new faculty the same way it did for me.”

In terms of Georgia agricultural production, which totaled $13.8 billion in farm gate value in 2015, UGA-Tifton is an important stop on the tour every year, said Joe West, assistant dean for UGA-Tifton.

“What makes Georgia agriculture unique is its diversity,” West said. “Multiple commodities dominate the agricultural landscape, and I’m glad we are able to showcase a few of those.”

As is the case every year, a visit to the campus dairy was the highlight of Thursday morning. Tour participants fed the calves and learned about dairy research from UGA animal and dairy scientists John Bernard and Sha Tao.

“It is important for these new faculty members to learn about the importance of agriculture to the state and the many ways the University of Georgia is helping Georgia farmers sustain their operations,” said UGA Interim Vice President for Public Service and Outreach Laura Meadows. “Most of the faculty members on the tour are new to Georgia, many are new to the South, and they need to understand the major drivers of the economy here.”

The UGA-Tifton and UGA-Griffin stops are two of almost 20 Georgia locations that the tour will visit by week’s end. Other stops included the Wolf Mountain Vineyards in Dahlonega and Amicalola Falls State Park in Dawsonville on Monday; the Center for Civil and Human Rights in Atlanta on Tuesday; and the Museum of Aviation in Warner Robins and Georgia Public Safety Training Center in Forsyth on Wednesday. 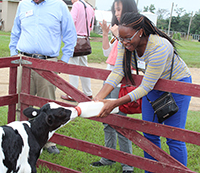