July drier than normal, but rainfall still causing problems for some Georgia farmers

After a month of below-normal temperatures, Georgia’s summer temperatures returned in July. Most of the state, except for the southeastern counties, was warmer and drier than normal, but climatologists don’t believe a drought is likely to develop over the next three months.

Despite these drier-than-normal conditions, frequent rain showers caused problems for farmers harvesting wheat and hay, and the rain prevented others from spraying for pests. Farmers had a hard time getting into the field due to rainfall in some areas, while irrigation has been needed in other areas. Overall, crop conditions seem good and farmers report that yields look like they will be high.

Wind damage from strong thunderstorms was reported on 23 out of 31 days in the month, along with some hail on July 7. Many of those storms pushed over trees, causing damage to buildings and power lines. A 150-year-old southern red oak on the campus of Piedmont Athens Regional Medical Center suffered a large, vertical split following a series of severe storms on Independence Day weekend and had to be removed. Winds early in the month caused flattening of tobacco plants, which resulted in extra labor as farmers had to straighten the plants.

For the entire month of July, the highest rainfall total recorded was 13.9 inches, measured near Screven, Georgia, in Wayne County. The next highest monthly total was followed by 13.48 inches, recorded by an observer from Pooler, Georgia, in Chatham County.

The outlook for August shows that we have an equal chance for near-, above- and below-normal temperatures across the state. The current weather pattern makes it seem that cooler conditions will prevail in the first half of the month before a return to warmer conditions may occur. The chances for wetter-than-normal conditions statewide through the month are slightly increased. The tropics are starting to enter their most active period and any storms that develop may affect rainfall for the rest of the growing season.

For more information, please see the “Climate and Agriculture in the South East” blog at blog.extension.uga.edu/climate/ or visit www.gaclimate.org. These resources are now also available on Facebook at “Southeast Ag Climate” and on Twitter at @SE_AgClimate. Please email your weather and climate impacts on agriculture to share on the blog to pknox@uga.edu. 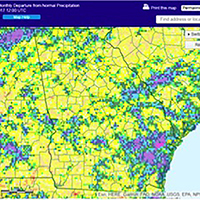