Fusarium wilt is on the rise in Georgia watermelon fields. University of Georgia scientists are studying whether this fungal disease can be managed through fumigation.

Fumigation is a method of pest control that involves using volatile compounds in a restricted area to kill pests and pathogens. Research on the interactive effect of fumigant and a fungicide Proline is yielding promising results, according to Bhabesh Dutta, UGA Cooperative Extension vegetable pathologist at the UGA Tifton campus.

“I am encouraged by the outcomes of the first year of this trial. We conducted this trial in a field with a history of fusarium wilt. To get a reduction in disease incidence down to as little as 4 percent is encouraging,” he said.

Dutta is collaborating with UGA Extension vegetable specialist Tim Coolong and UGA Extension Agriculture and Natural Resources agents Will Gay in Turner County, Georgia, and Josh Grant in Crisp County, Georgia. The research team plans to continue conducting multilocation field trials on the interactive effect of using both a fumigant and a fungicide to control fusarium wilt.

Over the last four to five years, fusarium wilt emerged as the biggest disease that watermelon farmers face. The limited control options for the disease exacerbate the problem.

Proline’s effectiveness is limited, Dutta said. The plants may look well through midseason, but they quickly decline as temperatures warm up in early June.

Once fusarium wilt is in a field, the pathogen becomes difficult to eradicate. Farmers who grow watermelons in infected fields are always at risk for fusarium wilt.

“The management of fusarium wilt is tricky, as multiple races of the pathogen are present in Georgia. While our watermelon growers are armed with watermelon varieties that are resistant to one race of the disease, there are also other races to which our plants are totally vulnerable. In those cases, the plants are very likely to incur significant, if not total, damage,” Dutta said.

Watermelon plants can become infected in multiple ways. The fusarium wilt pathogen can produce spores that can survive in the soil, and can be seedborne and introduced to fields where watermelons have never been grown.

The 2015 farm gate value for watermelon in Georgia was $124.5 million, according to the UGA Center for Agribusiness and Economic Development. 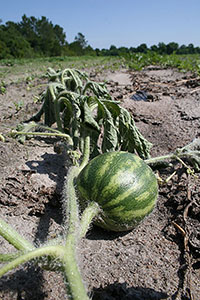