April brought plentiful spring showers to north Georgia but little rainfall to the southern half of the state, resulting in moderate drought conditions, delayed planting, and conditions conducive to wildfires near the Okefenokee Swamp.

The lack of rainfall in southern Georgia hindered planting and other fieldwork in the region. Many south Georgia farmers concentrated on planting irrigated acres while waiting for rain in dryland fields. Some farmers are still feeding hay to their livestock in places where pastures have not rebounded from dry conditions in recent months.

Strawberries improved after the impacts of the mid-March frost, but the wet conditions led to rot in some of the fruit. The lack of chill hours last winter led to some peaches not blooming or leafing out well.

Atlanta, Augusta and Savannah all recorded their warmest April on record, which dates back at least 139 years. Athens and Columbus, Georgia, were the second warmest and Macon, Georgia, was tied for fifth warmest.

The area of extreme drought in northern Georgia shrunk during the month but was not eliminated due to long-term precipitation shortages, although recent rainfall has been plentiful. Drought was eliminated from regions just south of Atlanta and Athens due to heavy rains during the month. However, the lack of rainfall in southern Georgia led to the development of moderate and even some severe drought in counties along the Florida border.

The highest daily rainfall total recorded by Community Collaborative Rain, Hail and Snow (CoCoRaHS) volunteers was 5.49 inches near Temple, Georgia, in Carroll County on April 6, followed by 4.87 inches measured at North Decatur, Georgia, in DeKalb County on the same date.

The West Mims Fire in southern Georgia, which was originally sparked by a lightning strike on April 6, burned more than 100,000 acres of the southern Okefenokee Swamp, over one-quarter of the 400,000-acre refuge. There is an evacuation area in St. George, Georgia, area and a number of roads have been closed due to low visibility.

For more information, please visit the “Climate and Agriculture in the South East” blog at blog.extension.uga.edu/climate/. To share your weather and climate impacts on agriculture on the blog, email pknox@uga.edu. 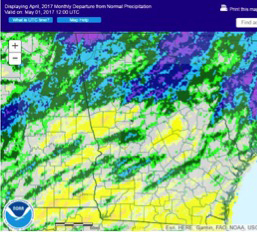