Extended fall drought could have effect on cover crops

“Growers who want to plant a cover crop to protect from erosion and other elements, as well as to keep some nutrients in the soil, should probably go ahead and do it,” Porter said. “It’s a risk because we don’t know when it will rain, and it could potentially be a waste of money.”

Although south Georgia received its first significant rain in more than two months the past two weeks, soil is still dry in some fields. For cover crops to be effective, they’ll need moisture. Porter believes irrigation could also be useful, although many ponds that are used for irrigation are very low.

“Growers may want to run a pivot over the top of their cover crops to get them emerged and growing,” Porter said. “Light irrigation to help get the cover crop established so it can do its job might be recommended this year because of the drought. I have heard many producers saying that they have planted a cover crop that still hasn’t emerged due to the lack of rainfall and soil moisture.”

Farmers normally plant cover crops in the winter to trap moisture in the soil from winter rain. Cover crops also protect against soil erosion, keep weeds from growing and restore nutrients in the ground.

“Typical cover crops are rye, wheat or any grass or vegetative cover that sits on the field over the winter,” Porter said. “It’s usually burned down or removed before planting in the spring. In some instances, farmers will roll the cover crop down and plant directly into it with a strip-till rig.”

While growers don’t put a lot of resources into cultivating cover crops, they will sometimes apply a little fertilizer to get the crops started.

There is no real alternative to cover cropping that accomplishes the same job, according to Porter.

Porter said that putting some resources into cover cropping may be beneficial in the long term, but growers should know where to draw the line.

“I definitely would not put the same resources into a cover crop as I would my typical row crops that I’m trying to produce,” Porter said. 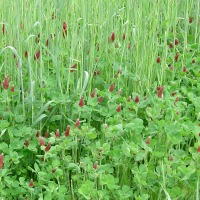 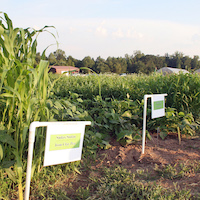 CAES News
New UGA Extension program offers green landscape certifications Posted on 03/15/21 by Maria M. Lameiras
For some residents, a pristinely manicured lawn free of weeds and undisturbed by insects is the ultimate goal. However, a new program from University of Georgia Cooperative Extension encourages creating a more natural landscape that reduces chemical use and incorporates native plants to promote biodiversity and protect the environment.
Subscribe for Updates