Pecan and cotton crops took the brunt of the agricultural hit by Hurricane Matthew, and southeast Georgia pecan and cotton farmers are still assessing the damage from the Friday, Oct. 7, to Monday, Oct. 10, weekend.

“The one crop that experienced extensive damage was pecans,” said Wade Parker, Agriculture and Natural Resources (ANR) program development coordinator for University of Georgia Cooperative Extension’s Southeast District, who estimated that the bulk of the damage was done to the bigger trees, exceeding 50 years old. “There were two ways that they were impacted: Multiple, multiple trees have been blown over and a lot of the green pecans that were in the trees were blown onto the ground as well. This came at the worst time; we can’t pick up the pecans and begin to harvest because we have so many trees on the ground.”

“Agents over in the Tattnall County area told me that around 10 to 30 percent of trees in pretty much any orchard were blown down,” Wells said. “There are a lot of trees on the ground over there.”

With more than $12 million worth of pecans spread over 7,000 acres, Tattnall County was the sixth highest-grossing county for pecans in Georgia in 2014, according to the UGA Center for Agribusiness and Economic Development. Production will slip this year and the damage could have a lasting impact, according to Tattnall County ANR agent Chris Tyson.

“The trees that blew over represent a long-term loss for a lot of growers. It can take anywhere from 10 to 12 years to bring planted trees back into production,” Tyson said.

Parker said that farmers who have experienced pecan damage can apply for federal cleanup funds from the U.S. Department of Agriculture Farm Service Agency (FSA). They are encouraged to go to their local FSA office and apply.

Pecans have been a big industry in Georgia as of late. They are the 10th highest-grossing commodity in the state, bringing in more than $300 million dollars in 2014.

“Outside of areas where the storm hit, production looks good this year,” Wells said. “From the visual size of the crop, it looks like one of the best years we’ve had in quite a few years.”

While pecans received the bulk of Hurricane Matthew’s damage, cotton farmers were also impacted by the hurricane. Much of the cotton in Georgia is defoliated in October. Defoliation is the process in which chemical treatments strip the leaves of the plant and speed up the maturity cycle. When the storm moved up Georgia’s coast, it devastated many cotton fields by knocking cotton bolls onto the ground. With fewer bolls on the remaining plants, many farmers in southeast Georgia suffered substantial damage.

“I’ve seen some fields that probably have 125 pounds of lint blown on the ground,” Parker said.

In Tattnall County, Tyson said that the wind damage from Hurricane Matthew also blew many of the younger stalks — those that hadn’t been defoliated — over. While some of those will stand back up, harvesting them won’t be easy.

“I had a grower do a variety trial in which he picked cotton samples from about a 30-square-foot area in four different varieties in order to see how much cotton blew onto the ground. We sent the samples to the microgin in Tifton to be ginned and run through the lint cleaner,” Tyson said. “It was pretty shocking how much cotton we lost in the storm. We estimate this grower lost anywhere from 200 to 400 pounds of lint per acre, depending on the variety. That amount could be close to half the grower’s expected yield.”

Kyle Dawson is an intern on the UGA Tifton Campus. 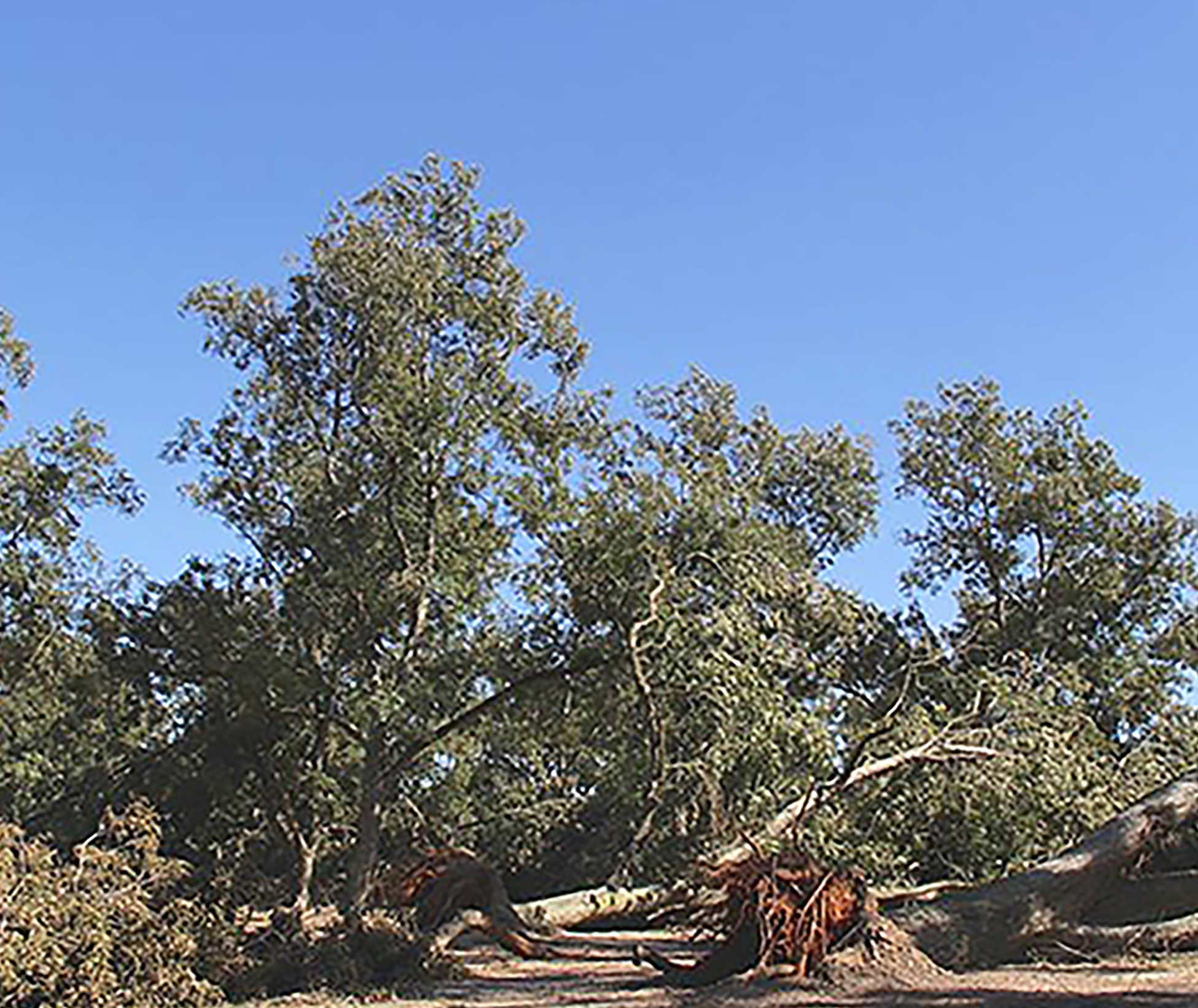 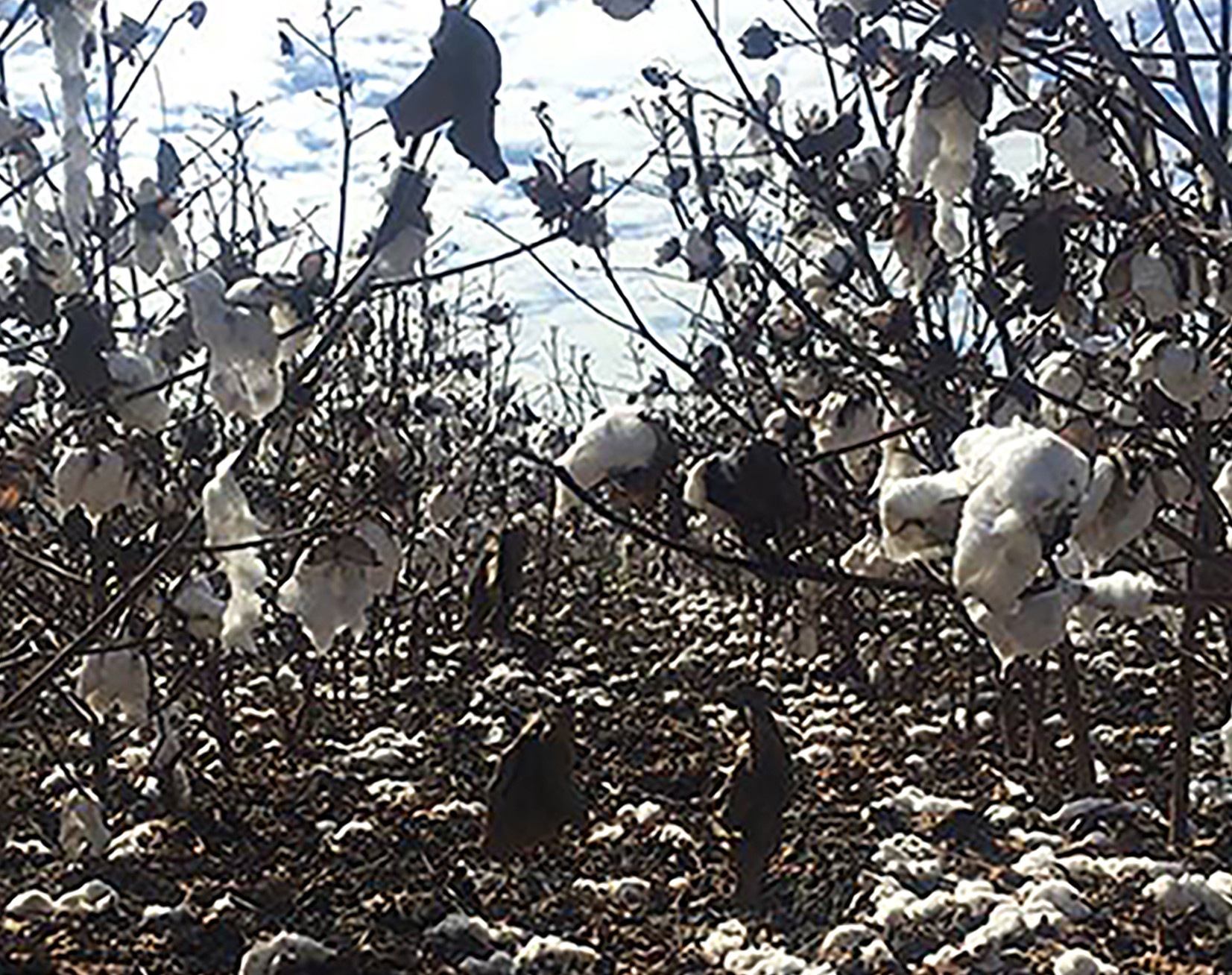 CAES News
UGA researchers evaluate the benefits of cover crops, living mulches in Georgia cotton 01/06/22 Maria M. Lameiras
For most row crop producers in Georgia, corn, cotton and peanut are planted in the spring and harvested in late fall. After harvest, the ground is left relatively bare, with the residue of the harvested crop the only organic material left on the ground. This is where cover crops come in.