Rainfall in August reduced the area of extreme drought in northern Georgia. However, abnormally dry conditions and drought expanded in central and south Georgia, especially in coastal areas.

August’s heat and variable rainfall had a significant impact on agriculture. Army worms became rampant in many pastures. The moist conditions in wet areas led to fungal diseases, which affected peanuts and vegetable crops. Rain hampered the harvest of corn in some locations, while corn in other locations didn’t set kernels because it was too dry. Peach production continued, although peaches were running smaller than average in size. Some pastures were still not producing hay, forcing livestock producers to sell cattle or purchase hay from out of state, while other areas with rain were seeing a return to better forage conditions and were producing hay again.

Heavy rains caused traffic problems in some locations. On Aug. 22, a brief, but strong, storm was blamed for a pileup of almost 30 cars that occurred north of Atlanta in the late afternoon, injuring 13 people.

The highest monthly total precipitation from National Weather Service reporting stations was 10.10 inches in Athens, Georgia — 6.57 inches above normal — and the lowest was in Valdosta, Georgia, at 1.92 inches — 3.42 inches below normal.

One daily rainfall record was set in August. Athens received 4.97 inches of rain on Aug. 4 in just a few hours, smashing the old record of 1.88 inches set in 1948. This was calculated to be close to a 500-year rainfall event, and the storm caused minor flooding and fallen trees. The rain also led to the collapse of roofs on a bowling alley and an auto repair shop. The record-setting rain helped make the month Athens’ second-wettest August on record after 1908, which had 18.43 inches of rain due to a low-pressure center that lingered over northeast Georgia for a week at the end of the month, similar to the weather event that caused flooding rain in Louisiana this month.

The highest single-day rainfall recorded by Community Collaborative Rain, Hail and Snow Network (CoCoRaHS) stations was 5.11 inches, measured southwest of Sautee Nacoochee, Georgia, in White County, on Aug. 4, followed by 4.26 inches measured in Winterville, Georgia, in Clarke County, on Aug. 5 in the same downpour that brought the record rainfall to the Athens airport a few miles away. Another station on the southeast side of Athens reported 4.14 inches on Aug. 18. The highest monthly rainfall of 12.33 inches was measured northeast of Dillard, Georgia, in mountainous Rabun County, followed by 11.02 inches measured at Flowery Branch, Georgia, in Hall County.

Severe weather was observed on 12 days during the month. All of the reports involve scattered wind damage.

Above-normal temperatures continued in Georgia for a third month. Brunswick set a new daily high minimum temperature of 81 degrees Fahrenheit on Aug. 26, replacing the old value of 80 F set in 2011. Several other maximum and high minimum temperatures were tied at weather stations around the state this month. Atlanta and Athens both experienced their fifth-warmest August on record, according to combined city/airport records.

It was not the warmest August for any station in Georgia, but it was in the top five for Atlanta, Athens and Augusta. Macon had its 10th-warmest August.

The outlook for September shows a continuation of above-normal temperatures through the month. Rainfall in northwest Georgia was expected to be below normal, but Hurricane Hermine was expected to bring widespread relief to the dry conditions in southeastern Georgia early in September. The outlook for July through September shows that above-normal temperatures are likely to continue, and below-normal precipitation is likely to occur across the state.

For more information, please visit the Climate and Agriculture in the South East blog at blog.extension.uga.edu/climate/ or visit the webpage at gaclimate.org. Please email your weather and climate impacts on agriculture to share on the blog to pknox@uga.edu. 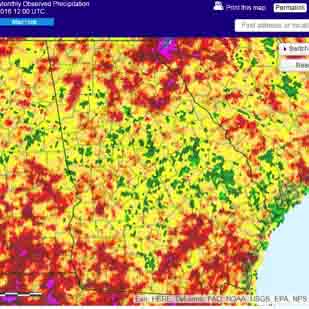