September was drier than normal despite month-ending rain

Despite Georgians’ constant umbrella use of late, most of September 2015 was actually drier than normal.

Most areas of Georgia reported less-than-normal precipitation, except those in the far southeast of the state. The precipitation was scarce early in September, but rain was more plentiful during the last week, which resulted in a reduction in drought.

Those early-September dry conditions increased pest pressure on some crops, but allowed for the reaping of corn and other crops. Increased rain at the end of the month reduced drought levels, but caused problems for farmers who wanted to harvest peanuts and other crops. The rain improved forage conditions for livestock producers.

The highest single-day rainfall recorded by a Community Collaborative Rain, Hail and Snow (CoCoRaHS) Network volunteer was 3.41 inches near St. Marys in Camden County, Georgia, on Sept. 17, followed by 3.23 inches near Fayetteville, Georgia, on Sept. 11. The highest monthly rainfall recorded by CoCoRaHS volunteers was 11.19 inches, observed near St. Simons in Glynn County, Georgia.

For more information, see the Climate and Agriculture in the SouthEast (CASE) blog at blog.extension.uga.edu/climate/ or visit the new website at gaclimate.org. Email your weather and climate impacts on agriculture to share on the blog to Pam Knox at pknox@uga.edu. 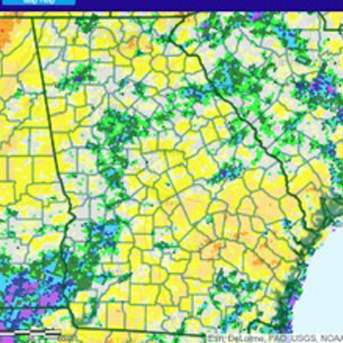