June was much warmer than normal, expanding drought across parts of the state and causing heat damage to some pasturelands and early summer crops.

Cities in the northern and southern parts of the state broke temperature records during June.

Because of the lack of rain and the above-normal temperatures, drought expanded in the southeastern part of the state during the month, and some severe drought was introduced. Northwest Georgia also experienced moderate drought by the end of the month.

The highest single-day rainfall in Georgia from Community Collaborative Rain, Hail and Snow Network reporting stations was 3.95 inches on June 10, near Riverdale in Clayton County. A Gwinnett County observer east of Buford reported 3.5 inches two days later. The highest total monthly rainfall was 10.97 inches, recorded by an observer north of Jesup in Wayne County, followed by 8.64 inches measured by another Jesup observer a few miles away.

There were 21 days when severe weather was reported somewhere in the state. The vast majority of those reports were for high winds, with a few reports of hail. For the first time since 2012, no tornadoes were reported in Georgia in June. Small hail caused some leaf damage to corn and other crops around the state.

Some farmers reported crop and pasture problems due to the hot temperatures and lack of rain. The high temperatures hit the watermelon crop particularly hard. Corn was harvested ahead of schedule in some areas due to the extreme heat.

In contrast, the heat was excellent for curing hay.

The extreme heat also resulted in the curbing of electricity use by some large institutional power customers in order to cope with increased air conditioner use and higher power bills.

The University of Georgia announced that a concerted effort to conserve energy on the hottest days of June saved the university $175,000 in utility costs. In fact, a UGA turfgrass center groundbreaking ceremony in Griffin on June 24 was moved indoors due to the high temperatures that afternoon.

The outlook for July shows that warmer and drier-than-normal conditions are likely to occur across most of Georgia. This pattern is expected to continue for the next few months under the current El Niño.

For more information, please visit the Climate and Agriculture in the South East (CASE) blog at blog.extension.uga.edu/climate or the Georgia Ag Climate website at gaclimate.org. 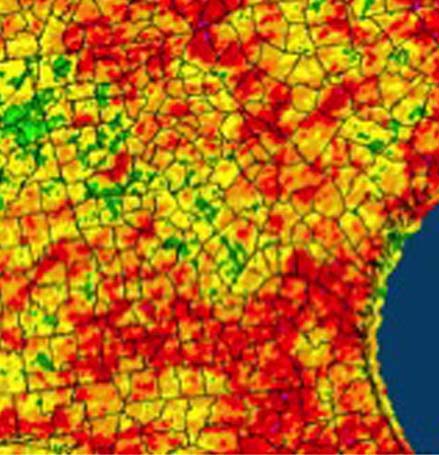