March 2015 was warmer and drier than usual for most of Georgia. While the warmth encouraged rapid growth of planted corn and other crops, cold conditions late in the month may have caused some damage to fruit blossoms. The warm and dry conditions also increased soil moisture shortages across the region.

Planting is in high gear across the state. Soil temperatures increased quickly due to the warm and dry conditions, and observers in southern Georgia reported rapid growth in planted corn. However, dry conditions were a concern for some farmers worried about germination. Abnormally dry conditions expanded from 9 to 42 percent of the state over the month, according to the National Drought Monitor.

Frost hit the northern half of Georgia late in the month. Some damage to fruit blossoms in bloom at the time was expected to occur, but no estimates of damage were available at the time this report was written. If you have damage to report, please email Pam Knox at pknox@uga.edu.

No daily rainfall records were set in March this year. The highest single-day rainfall, as recorded by Community Collaborative Rain, Hail and Snow Network (CoCoRaHS) stations, was 1.93 inches near Lake Park in Lowndes County on March 23, followed by a Thomas County observer in Thomasville reporting 1.88 inches on the same date. The highest monthly total rainfall was 7.49 inches, observed east of Helen in White County, followed by 5.18 inches measured near Cherry Log in Fannin County and 5.17 inches measured near Ringgold in Catoosa County. Several observers reported a small amount of snow on March 6.

In March, there was only one day of severe weather recorded in the state. On the last day of the month, strong winds and scattered hail were observed at a number of locations around the state. This is the first time since official records began in 1950 that there was not a single tornado observed in Georgia in March. 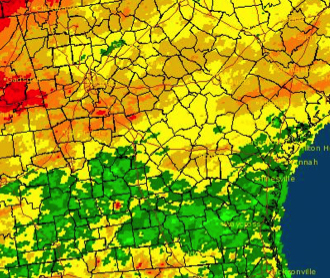