November 2014 will go on record as one of the top five coldest Novembers for many areas across Georgia, although the final average has yet to be calculated.

Last month’s cold snaps had little impact on the state’s cotton and peanut crops, most of which were harvested by the time the low temperatures hit Georgia. Dry weather in parts of the state did stress canola and winter forages.

Augusta reported a record low of 15 F on Nov. 19, much lower than the previous record of 22 F set on Nov. 21, 1951. This is the earliest that a temperature below 20 F was ever observed at that location.

While November brought super-cool weather to parts of the state, it also brought unseasonably high temperatures, just days after record or near-record lows.

Precipitation varied across the state as well, from above normal in southeast Georgia to drier than normal in the west-central and far northwest regions of the state.

Daily rainfall records were set at Macon, Savannah, Alma and Brunswick last month. Most of the heaviest rains fell on Nov. 23 or 25, as thunderstorms moved through the region.

The highest single-day rainfall reported by a Community Collaborative Rain, Hail and Snow Network volunteer — a non-profit, community-based network of volunteers that measure and map precipitation — was 4.44 inches near Bremen, in Haralson County, on Nov. 17. A Jackson County observer, in Braselton, reported 4.07 inches on Nov. 24. An observer just north of Valdosta, in Lowndes County, recorded the highest monthly total rainfall in the state — 8.9 inches — followed by a 7.41-inch total at a station just east of Thomasville, in Thomas County.

Georgia experienced severe weather three days in November, with wind damage occurring Nov. 16, 17 and 23 and tornadoes touching down in Twiggs County on Nov. 17. Four tornadoes touched down between Columbus and Augusta during a separate storm system on Nov. 23, including one with a semi-continuous path of 118 miles. 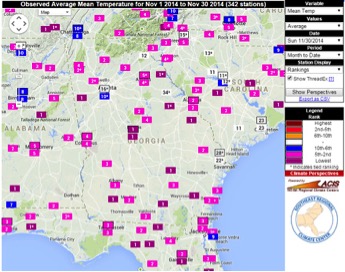