The state was split into precipitation “haves” and “have nots” last month as western Georgia received copious rainfall and the eastern half the state remained dry.

The dry conditions for most of the state this month aided farmers in finishing their harvesting of peanuts, cotton and other crops. However, dryland peanuts and cotton are not grading well due to the drought the past few weeks. Cotton was also hurt by the heavy rains that fell on Oct. 14 and 15 as the bolls were opening. Dry conditions in eastern Georgia delayed planting of small grains and winter forage. Frost ended the growing season in a few areas of the state.

Record high temperatures were recorded at eight stations across the state and high temperatures tied existing records at 11 sites. Most notable among them was the 90-degree record set in Savannah on Oct. 27, which broke the old record of 89 F set in 1940 and set a new record for the latest 90-degree day in the city’s long history, eclipsing the old record-setting date of Oct. 21, 1943. Climate records in Savannah date back to 1871.

Most of the rain that fell at the wetter stations was reported on a single day, Oct. 14. On that day, a developing low-pressure center in Oklahoma brought a stationary front to western Georgia, dumping copious rain on the area. Atlanta, Athens and Columbus all set new record high precipitation amounts for that date. Atlanta received 2.54 inches, beating the old record of 1.92 inches set in 1959. Athens received 2.78 inches; the old record was 1.30 inches, also in 1959. Columbus saw a whopping 3.91 inches; the old record of 1.49 inches was set in 2009.

The highest monthly total rainfall was 10.19 inches, observed by an observer 3.5 miles northeast of Dillard in Rabun County and 9.11 inches by the Rabun Gap observer mentioned previously.

Georgians saw severe weather on six days in October. Wind damage occurred on Oct. 3, 10, 13 and 14, with hail damage on Oct. 6 and 9. The most notable severe weather occurred on Oct. 13, when six small tornadoes were observed in Atlanta and central Georgia. Five of the six tornadoes were seen in the Atlanta metro area early in the morning. Of these, the greatest damage came in an EF-1 tornado in Alpharetta. You can read about the tornadoes at www.srh.noaa.gov/ffc/?n=2004101_northga_tors.

The outlook for November shows that conditions are expected to continue to be relatively quiet. The tropical storm season is nearly over and very little additional activity is expected this year. Predictions of temperature and precipitation show equal chances of above, near and below normal conditions. The three-month prediction for November through January shows no favored temperature patterns, but does show an increased chance of above normal rainfall, especially in south Georgia. This is linked to the expected development of a weak El Niño in the next couple of months, which should affect the Southeast through winter. 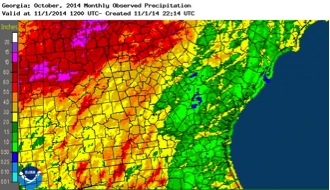