April was significantly wetter than normal across most of the state, which recharged soil moisture but delayed planting of some summer crops.

The highest single-day rainfall reported from the Community Collaborative Rain, Hall and Snow network was 5.14 inches near Manor in Ware County on April 8. Two other CoCoRaHS observers in Waycross reported 4.9 and 4.62 inches on the same day. The highest monthly total rainfall was 14.65 inches, observed 13 miles east-northeast of Fort Gaines in Clay County, followed by 12.13 inches measured northwest of Albany in Lee County.

The University of Georgia Automated Environmental Monitoring Network station in Donalsonville (Seminole County) reported 23.54 inches for the month, including 5.93 inches on April 7 alone.

Despite the wet weather, temperatures hovered around normal across the state.

In addition to wet and temperate weather, April saw two waves of severe weather across Georgia.

The first round occurred on April 7. Observers reported two tornadoes and damaging winds after a strong cold front came through. The two EF1 tornadoes were observed in Ocilla in Irwin County and Lowry, 8 miles northwest of Griffin in Spalding County. Three people were injured. A report on this flood and severe weather event can be found at www.srh.noaa.gov/ffc/?n=20140407_flooding_tornado.

The second round of severe weather occurred April 28 in the wake of another strong front. Two tornadoes also occurred during this event, including an EF2 storm that moved from Troup County to Heard County. The second, an EF1 storm in Whitfield County, destroyed a chicken house and killed 16,000 chickens before crossing into Tennessee.

In addition, a severe wind event associated with a “wake low” on April 30 caused strong wind gusts across central Georgia following a squall line. One man was killed in Athens when a tree limb fell on his van, and several others were injured. Many trees and power lines were blown down, causing scattered power outages and a few school closings due to the lack of power. A description of the storm can be found at www.srh.noaa.gov/ffc/?n=wakelow20140430.

More news and information about the intersection of climate and agriculture can be found at blog.extension.uga.edu/climate/. 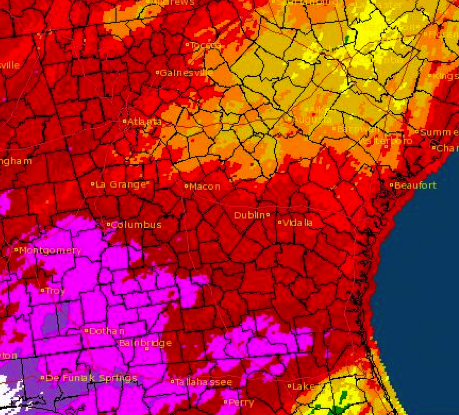