Drought almost gone, but lingers on the southeastern coast

Drought conditions continued to shrink across the state during April due to the seasonal rainfall and cool spring temperatures; the only area of Georgia left in drought is a small sliver along southeast coast.

Northern Georgia’s drought eased in February due to wet conditions north of Atlanta in January 2013 while most of the rest of the state saw the drought gradually diminish over March and April.

Wet conditions in February and continued rains in the following months erased years of precipitation deficits in all but the deepest groundwater aquifers. Many farmers went from very dry soil conditions to saturated fields, leading to problems for some crops and difficulty getting into the fields for spring planting.

The cooler temperatures in March and frost in early April also caused some delays in farmers’ fields and damage to some crops. However, more seasonable temperatures through the rest of the month allowed slow planting of peanuts and corn as the month progressed.

Excessive rains triggered some worry about this year’s Vidalia onion crop after growers reported some seed stem problems. Seed stems can be brought on my excessive rain and cold temperatures and affect the onions by drying out and hollowing the onions’ cores, which renders them unsuitable for sale.

Some growers were reporting fields with 30 to 40 percent seed stem problems compared to a typical year when seed stem losses might be in the two to three percent range. However, yields are expected to be higher than average and that may offset some of the losses due to the seed stem loss. The onions available for sale should be of good quality, according to industry reports.

Hail associated with severe weather damaged canola and transplanted vegetables in some areas. The cold temperatures in March delayed the production of Georgia highbush blueberries by up to ten days due to the slowdown in maturity, but the total volume is not expected to be affected in spite of minor damage from hail in some locations.

On April 11, three weak tornadoes were reported in Haralson, Polk and Lumpkin/Hall counties, along with hail up to baseball-sized. High winds were reported in several coastal counties on April 14, including one report of 86 mph from the National Estuarine Research System site on Sapelo Island in McIntosh County. A tornado was reported near Mansfield in Newton and Morgan counties on the afternoon of April 19 and two EF0 tornadoes were confirmed near Moreland in Coweta County and McDonough in Henry County on April 29, along with large hailstones and high winds. Damage from the storms was mainly due to tree damage, although a small number of buildings were also affected.

Temperatures across the state in April were typical for spring in the Southeast.

Savannah tied a record high temperature of 88 F on April 12, matching the old record set in 2008.

The highest single-day rainfall from a Community Collaborative Rain Hail Snow Network station was 5.86 inches west of Blairsville in Union County on April 18. An observer northwest of Macon in Bibb County received 3.82 inches and a Summerville observer in Chattooga County reported 3.64 inches on April 29. The highest monthly total rainfall was 12.34 inches, reported the Blairsville observer mentioned above, followed by two observers in Fannin County near McCayville and Blue Ridge with 11.43 and 11.25 inches, respectively. 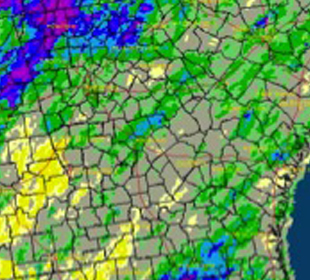 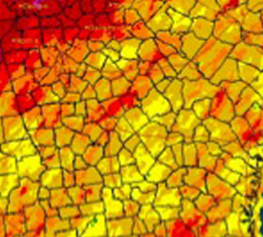