Forecasters initially projected rains from Hurricane Isaac could erase or at least put a large dent in Georgia’s drought, but the state has seen little relief.

“We thought that it would park over Georgia, and we would get a few days of rain, which could have wiped out the drought,” said Pam Knox, an agricultural climatologist with UGA Cooperative Extension. “Instead it moved further to the west than we thought. They’re getting way more than they need, and we really haven’t gotten very much.”

While regular afternoon showers have picked up in some parts of the Georgia, about one-half of the state is still experiencing some level of drought. The hardest hit area is a wide swath across middle Georgia, Knox said.

Some bands of rain did cut across parts of the state this week providing spotty relief, but not enough to do much more than moisten the soil.

Streams, creeks and rivers are still extremely low, she said.

“Every bit of rain we get is good, but it wasn’t enough to really change the drought situation … Some areas probably got a little drought relief, but it was spotty,” Knox said. “In the summer we really need about an inch a week to keep up with evaporation, and even with the storm some areas haven’t gotten that.”

While the slow moving storm wreaks havoc on Louisiana and Mississippi, there’s a small chance that Georgia could see more precipitation related to systems as it pushes waves of moist air northward. Cloud cover generated by this moisture should keep temperatures cooler than normal for the next few days.

As the bulk of the storm moves north, it will likely bring substantial drought relief to Midwestern states like Indiana and Illinois. But even then there’s a chance the storm could dump too much rain at one time, further damaging grain crops. 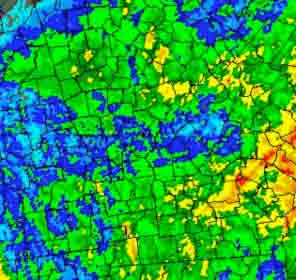