In spite of record-setting high temperatures at the end of the month, June was slightly cooler than normal in Georgia. Rainfall across the state varied greatly as Tropical Storm Debby dumped more than 10 inches on the southern half, but left north Georgia dry.

However, the monthly average temperature for Atlanta was 77.4 degrees (0.1 degrees above normal).

Less than two days later, some of the same cities broke their all-time high temperature records. The late June heat wave was caused by a large high-pressure system spreading across the eastern U.S.

The cooler temperatures and more frequent showers in early June reduced drought levels across many parts of Georgia during the first three weeks of the month. However, the dry conditions coupled with the extremely hot temperatures at the end of month reversed that trend, and drought started to expand across northern and central Georgia again by the beginning of July.

National Weather Service stations reported that the highest monthly precipitation total occurred in Brunswick, with 11.40 inches (6.56 inches above normal). The least amount was in Columbus, which saw only 2.18 inches of rain (1.54 below normal).

The highest single-day rainfall from Community Collaborative Rain, Snow and Hail Network stations was 6.64 inches on June 26 in southeast Georgia near Lake Park in Lowndes County from Tropical Storm Debby. The second highest daily total reported by the network was 6.34 inches on June 25 reported at Kingsland in Camden County from the same storm.

Severe weather was reported for eight days in June. The reports were mainly due to wind damage, although hail was also reported in a few locations.

Flash flooding occurred in Thomasville on June 6, when five to six inches of rain fell near town in just an hour and a half. The rain caused power outages, water damage to some local businesses and slightly injured a 12-year-old boy who was sucked into an underwater, manhole but was rescued by police and fire officials.

Tropical Storm Debby passed south of Georgia through the peninsula of Florida late in the month. Unfortunately for drought-stricken areas of Georgia, the rainfall from Debby was confined to areas along the Georgia and Florida border and in the southeastern corner of the state.

Crop conditions in Georgia improved during June due to the more moderate temperatures and timely showers early in the month. A few farmers were even hindered from field work by wet conditions in their fields. However, the hot and dry conditions at the end of the month reduced soil moisture across most of the state and increased stress on many crops in areas that were not reached the rain associated with Tropical Storm Debby. 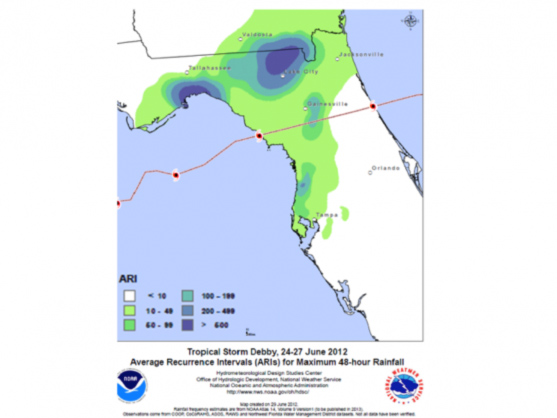 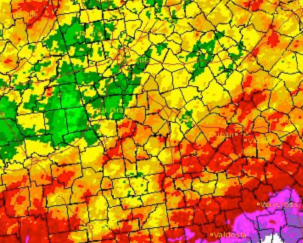