Despite the challenges of the pandemic, 370 entries were submitted in the 2020 Southeastern Hay Contest (SEHC), just below the record-setting number of submissions for 2019. More states submitted samples to the contest than ever before, with nine represented.

The grand prize was awarded to Brian Johnson of McKenney, Virginia, for his alfalfa hay sample. Johnson received $1,000 from Massey Ferguson and the choice of a new Massey Ferguson DM Series disc mower or RK Series rotary rake to use for next year’s hay production season. The top three entries in each category received cash prizes of $150, $100 and $50, respectively.

All of the winners were announced Jan. 5 at the American Forage and Grassland Council annual conference in Savannah, Georgia.

The contest is a collaborative partnership between the thirteen university Cooperative Extension programs in the southeast. Entries were judged by the UGA Feed and Environmental Water Lab using near-infrared reflectance spectroscopy testing procedures. The sample with the highest relative forage quality (RFQ) score wins. The RFQ score rates the forage quality based on protein, energy and fiber digestibility.

Mixed, Annual Grass or other Hay:

The contest is open to any hay or baleage producer from Alabama, Arkansas, Florida, Georgia, Kentucky, Louisiana, Mississippi, North Carolina, South Carolina, Tennessee, or Virginia, as well as parts of Oklahoma and Texas.

All entries for the 2021 contest must be received by Sept. 1, and winners will be notified by Oct. 1. Awards will be presented during the Sunbelt Agricultural Expo on Oct. 19.

More information on how to enter the contest can be found at www.sehaycontest.com or by following on the Facebook page @SEHayContest. 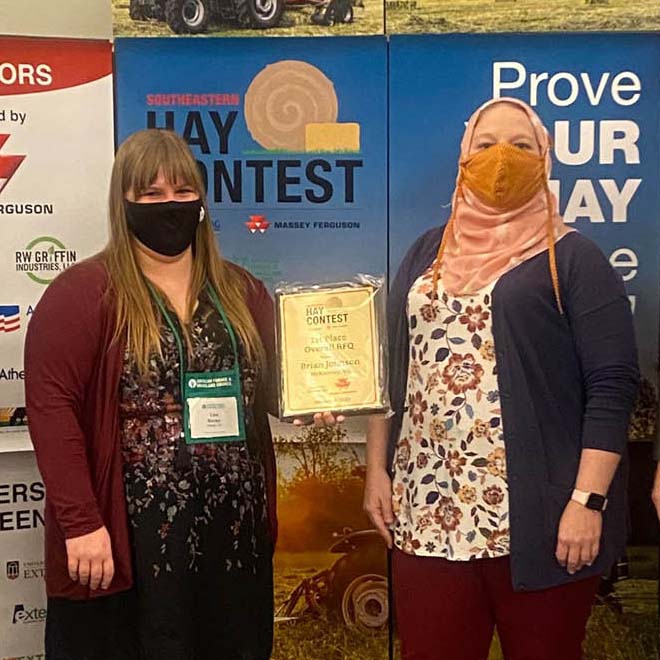