Three new groundnut varieties soon will be available in Malawi after the national program released new drought-tolerant Spanish-type varieties through a regional research collaboration and with support of the Peanut Innovation Lab, headquartered at the University of Georgia’s College of Agricultural and Environmental Sciences. CG 15 & CG 16 gained approval early this year and will be available in limited quantities this season, while a third new variety was just approved for release and will be available next season.

To generate the new varieties, breeders working for the Malawi Department of Agricultural Research Services sourced materials from ICRISAT and tested these over several seasons, identifying the most resilient and highest yielding varieties that hold potential in the commercial market.

“We selected the varieties for their tolerance to drought, and started testing in the 2014/15 season under the Agricultural Productivity Program in Southern Africa (APPSA) project,” said Justus Chintu, principal agricultural research scientist for groundnut breeding at the Chitedze Research Station near Lilongwe. “However, that project finished before we completed our testing of the varieties. We continued using funds obtained under the Peanut and Mycotoxin Innovation Lab and Peanut Innovation Lab - especially for on-farm trials and extra on-station trials.”

Chintu and the DARS team completed the trials in the 2019/20 season testing the varieties in collaboration with Limbe Leaf and Pyxus, two commercial agricultural production companies in Malawi.

Those companies are working with the USAID-funded Malawi Agricultural Diversification Activity, a partner of the Peanut Innovation Lab.

“We were linked to Pyxus and Limbe Leaf by the Peanut Innovation Lab and Malawi Agricultural Diversification Activity,” Chintu said. “We have been testing on their farms for two seasons which helped us identify the best ones for release. In addition, two varieties (CG 15 & CG 16) were also identified and released last year in Mozambique, where we are collaborating with Dr. Amade Muitia, peanut breeder with IIAM in Nampula.”

The latest groundnut variety approved in Malawi, which was released for the 2015 season under the name “Wamusanga” in Zambia, shows potential for the South African export market, which prefers small Spanish types over the more common Virginia types grown by the majority of famers in Malawi. Good Nature Agro, a social enterprise based in Zambia that has recently expanded to Malawi, along with Limbe Leaf and Pyxus, expressed interest in growing Wamusanga to export to South Africa. To authorize the variety for release in Malawi, the DARS team evaluated the variety both on-farm and on-station during the 2019/20 season.

To gain the required second year of data, Chintu turned to a colleague in Zambia, groundnut breeder Lutangu Makweti with the Zambian Agricultural Research Institute. The Peanut Innovation Lab has supported collaboration between a network of groundnut breeders in Africa who share knowledge, variety performance data and germplasm to make strides as a pan-African team. Makweti was able to provide field data from just over the border in Eastern Zambia that allowed Chintu to obtain the permit to release the latest variety this year.

In Malawi, the new variety likely will be called Wamsanga (CG 17), a bit different from the name in Wamusanga that is used in Zambia. 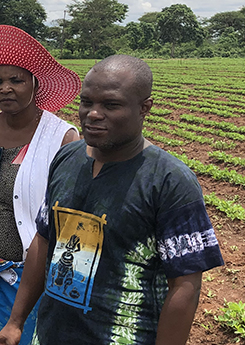