Many of the leaf diseases that are apparent in the fall are actually the result of infections that occurred in the spring. As the season progresses, these leaf spots begin to enlarge and become more noticeable. Late summer rainfall or overhead irrigation can perpetuate these diseases and lead to defoliation or the decline of infected plants. Leaves that remain wet for extended periods are more likely to develop spots.

Leaf spot symptoms usually start out on older leaves near the bottom of the plant and move upward later in the season. Corynespora and Cercospora are easy to recognize due to the dramatic purple lesions that form on the surface of the leaves. As these spots enlarge, they may become irregular in shape and develop a grayish center surrounded by purple margins. Eventually, the entire leaf may become a yellowish color. The fungus produces many spores in the center of each spot, which are easily spread by wind, splashing water, rainfall or irrigation.

Fungal leaf spots are generally not a major problem for hydrangeas beyond their aesthetic appearance. Although the disease rarely kills the plant, severe outbreaks over the course of multiple years can reduce plant vigor. Years that start off with a very wet spring will often see more leaf spot diseases on hydrangea. By the time most people notice the disease in late summer or fall, it’s too late to spray a fungicide for the season. Those leaves will remain spotted until they fall off in the winter, whether or not you spray.

Some years will be worse than others depending on the weather. Avoid getting leaves wet when watering plants or use drip irrigation as an alternative. Water plants early in the morning to allow the leaves to dry more quickly as the sun rises. Infected leaves may be removed at any time during the season to slow down the spread of the disease. Also, removing and disposing the leaves that fall on the ground or that remain on the bush in the winter can help reduce carryover of the disease from one year to the next.

For young plants, it may be worth the extra effort to spray as many new leaves as possible in the spring as a protective measure. Older plants generally better tolerate the disease. Fungicides containing chlorothalonil, mancozeb or thiophanate-methyl are most effective when applied prior to the first sign of leaf spots and to protect newly developed leaves. Reapplying every 10 to 14 days may be necessary to prevent these diseases. Be sure to follow the label for application rates and safety precautions. 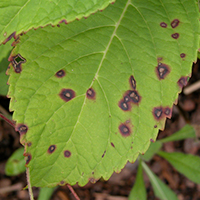 CAES News
UGA Trial Gardens holds annual Plantapalooza plant sale 04/05/22 Jordan Powers
Whether on the hunt for Sinningia speciosa or simply looking for a leafy perennial in the perfect shade of green, the annual plant sale hosted by the Trial Gardens at the University of Georgia will have plenty of options for experts and hobbyists alike. The sale will run in person from 8 a.m. to noon on Saturday, April 9, at 1030 West Green Street in Athens.

CAES News
Keep your holiday gift plants beautiful all year 12/08/21 Laura Ney
As vibrant holiday plants begin to adorn the shelves of hardware stores, grocery stores and garden centers, consumers are attracted to the pinks, reds and whites atop deep green foliage, which add festive pops of color in winter homes. The appearance of plants like poinsettias and Christmas cacti usher in the holiday season and we love to fill our halls and entryways with their holiday cheer. But what about after the holidays?

CAES News
Georgia flower farm puts sustainability, employees first 11/04/21 Emily S Davenport
Principles before profit has been 3 Porch Farm’s business model from the beginning. When the farm was just a dream, Steve and Mandy O’Shea — owners and operators of 3 Porch Farm — knew that they wanted to use their business to do as much good as possible. And now, with more than 10 years of farming under their belts, the couple’s commitment to sustainability is evident in everything they do on the farm.
Subscribe for Updates