Oguadinma is one of 15 students who received the award at the SQF International Conference held last October in San Antonio, Texas. Each student received a $3,000 scholarship and an all-expense-paid trip to attend the conference with more than 850 food safety professionals.

A native of Nigeria, Oguadinma came to the U.S. to study food science after earning an undergraduate degree in biochemistry. He selected UGA after researching leading food science teaching and research programs in the U.S.

“I discovered that UGA has one of the best programs in food science in the country, boasting of esteemed food-safety researchers such as (Distinguished Research Professor) Dr. (Larry) Beuchat and (Regents Professor) Dr. (Michael) Doyle. These are very remarkable people and I knew to work with them and current outstanding faculty in the UGA food science department would teach me a lot and enable me to grow in my career,” he said.

“After learning of his remarkable work on synthetic infant milk fat formula and enzymatic transesterification of lipids, I knew I could translate my degree in biochemistry into food science; a world of possibilities was opened up to me,” Oguadinma said. “The science of food will be here forever because humans need the energy to survive. Today, people have become more aware of what they eat and have become smarter about their food consumption. Now more than ever, safe and healthy food is in high demand.”

Oguadinma came to the UGA Athens campus in 2017 and moved to the UGA Griffin campus in 2018 to conduct research under the guidance of UGA professor Ynes Ortega, a world-renowned parasitologist, at the UGA Center for Food Safety. His work with Ortega focused on two major parasites (Cyclospora cayetanensis and Cryptosporidium parvum) on parsley and cilantro. The parasites can contaminate herbs and fresh produce and cause severe diarrhea in infected individuals.

“We looked at how well these parasites survive on these herbs in the field. Cilantro is hugely consumed in a lot of global cuisines, and herbs overall are widely known to be beneficial health-wise,” Oguadinma said. “You want them to be as safe as possible and this research was in response to a need in the food industry.”

After completing his master’s degree in food science in fall 2019, Oguadinma began his doctoral studies with UGA Center for Food Safety microbiologist Govind Kumar. His project focuses on antibiotic resistance in microbes, like E. coli and Salmonella; their susceptibility to antimicrobials; and their behavior on different food matrixes.

In addition to knowledge in food science and food safety, Oguadinma has learned a lot about leadership and communication at UGA. He serves as the president of the UGA-Griffin Student Advisory Council and is widely involved with on-campus activities.

He credits his communication skills to growing up helping his mother, a pharmacist who owns and manages a retail pharmaceutical practice in Nigeria.

The oldest of four children, Oguadinma misses his family back home in Nigeria and certain foods he can’t get in the U.S. but, despite cultural differences, he says the quality of life in the U.S. is much better than that of many other countries.

“There are other cultural differences, like our predominantly communal way of life, which is different from the strong culture of independence here in the United States. Here on the UGA Griffin campus, you can meet people from a wide range of countries. The diversity is just amazing,” he said. “I’m learning so much in the U.S. and, in the long run, I want to get as much knowledge as I can about the food industry. I’ve learned so much in the few years I’ve been here and I know that I have so much more to learn.”

To learn more about the UGA food science program, go to foodscience.caes.uga.edu. 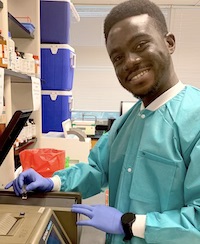 CAES News
Refugees at higher risk for persistent infections, according to UGA-led study 06/28/22 Jennifer L Reynolds
The destruction caused by war is evident both in its toll to human life and its impact on infrastructure. Those who are lucky enough to escape violence face many challenges, from finding a safe place to live to securing employment, but another threat could further jeopardize their ability to survive — an increased risk of illness.
Subscribe for Updates