To protect against scab disease resistance, Georgia pecan farmers now have a new fungicide in their arsenal, according to University of Georgia plant pathologist Tim Brenneman.

Miravis, which is already being used successfully on other crops such as peanuts, contains a new active ingredient, pydiflumetofen, that should strengthen current pecan disease management programs, said Brenneman, a professor in the UGA College of Agricultural and Environmental Sciences.

“We’re excited to have a new class of fungicides. We’ve needed some other chemistries because of resistance issues to several of the fungicides we’re using already,” he said. Miravis has a completely different mode of action and should control these resistant isolates. “The product labeled on pecans is actually Miravis Top, which contains pydiflumetofen plus difenoconazole, one of our most active triazole fungicides. We had trials in orchards across south Georgia in 2019 and achieved excellent scab control.”

Scab disease does not usually kill trees, but it can greatly reduce yields. The fungal pathogen that causes scab overwinters in the tree as lesions on stems and old nut shucks that remain in the tree after harvest. When temperatures begin to warm in the spring, the fungus becomes active and starts to produce new spores that are spread by rain and wind.

Farmers repeatedly use fungicide treatments to combat scab disease during rainy growing seasons. However, this repeated exposure causes scab to develop resistance to certain chemicals. As a result, an already difficult disease to control becomes much more challenging to manage. The key is to use a combination of products that each control the fungus in a different way.

Brenneman says that the best time to apply this new fungicide is during the nut-sizing period from June to August. He recommends growers apply a fungicide application every two weeks or even every 10 days during a rainy season on susceptible cultivars. Most growers will spray between eight and 10 times in a normal year and as much as 15 to 20 times during a wet year.

Phosphite fungicides were already labeled for pecans but are being used by more and more growers. Recent research has shown them to be very active on leaf scab. The mode of action of the phosphites is completely different than that of Miravis Top, so using them prepollination sets the stage for resistance management, especially if growers still rotate standard protectant products like Elast or Tin postpollination.

This new label for Miravis Top use on pecans was finalized in early September.

“Pecans are subject to some major disease issues, especially pecan scab. We really rely on fungicides because the trees live many years, and cultivars tend to become more susceptible to scab as they age. You can’t rotate a pecan tree like you can rotate a peanut plant. When you have resistance issues on a perennial crop like pecans, it’s a serious problem,” Brenneman said. “Having a totally different active ingredient to work into those fungicide rotations is very important.”

Controlling for scab is a costly expense for producers, and this year has been no exception.

“If we dodged the early season scab with the dry weather, we made up for it in midseason. It caught up with some people because they slacked off with their fungicides,” Brenneman said. “The problem with pecans is that it takes growers so long to spray. You have big orchards, and these huge air blast sprayers are very expensive. They have to drive slowly through the orchard. For some folks, it may take them 10 days to spray their trees.

“They can’t just respond quickly. When the wet weather comes in and they’re behind schedule, it can be a problem.” 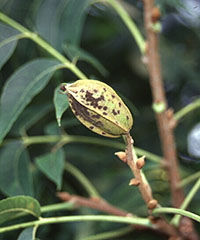