A record 380 entries were submitted in this year’s Southeastern Hay Contest (SEHC), and the grand prize was awarded to Yon Family Farms of Ridge Spring, South Carolina. The winner received $1,000 from Massey Ferguson and the choice of the use of a new Massey Ferguson DM Series disc mower or RK Series rotary rake for next year’s hay production season.

All of the winners were announced at the Sunbelt Ag Expo in Moultrie, Georgia, on Oct. 15.

Mixed, Annual Grass or Other Hays

The SEHC is a competition between producers from seven states — Georgia, Florida, North Carolina, Alabama, South Carolina, Arkansas and Texas — that allows farmers to gauge the progress of their crop from each sample submitted.

“We believe that each farmer who submitted an entry can continue to learn and improve their farming operation,” said Lisa Baxter, UGA Cooperative Extension forage specialist. “We want growers to continue to strive to work toward improving their hay quality. One of the best ways to do that is to sample their hay and enter a contest like this.”

Baxter said all farmers should test their hay regularly but admits that not all do.

More information on how to enter future editions of the SEHC can be found at www.sehaycontest.com. 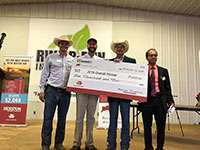