When Baxter joined the UGA Tifton campus in March, she set out to find a way to reach as many people as possible with information in her field.

Inspired by a Facebook advertisement for custom Legos, Baxter customized her own Lego minifigure to create the “Lego Forage Specialist” or “Lego Lisa.” Several times a week, Baxter photographs her “mini-me” at work in the field or in the office. Then she adds captions to the photos, including useful tidbits of information for audiences on Instagram, Facebook and Twitter.

To date, Lego Lisa has about 250 followers on social media where she tells jokes, advises Georgia producers about upcoming state meetings, and cautions growers about problems that could affect their crops.

“It’s a different way of getting a message across than just listening to a 30-minute PowerPoint presentation or reading another email,” Baxter said. “If we see armyworms that have been reported, we’ll do a picture with a sweep net saying, ‘You need to scout for armyworms.’ We had some herbicide damage in some Bermuda grass plots, so we took a picture of that and said, ‘If you’re pursuing summer weed control options, be aware of potential stunting.’”

Using her affinity for Legos, Baxter customizes the minifigure’s attire and accessories based on the message.

When she’s working outside, the weather conditions generally determine how Lego Lisa is dressed. In most photos, Baxter holds the figure’s feet and keeps her hand out of the picture and to keep the little Lego from blowing away in strong winds.

For National Forage Week in June, Baxter ordered several costumes, including a lab coat, for her Lego sidekick. Her clients have joined in on the fun and one UGA Extension county agent brought in a few of her child’s Lego accessories for Lego Lisa because the child was worried she didn’t have any toys to play with.

Many industry representatives even request the Lego’s presence for events and their own social media efforts. Even though she is tiny, Lego Lisa is bridging the gap between industry and Extension.

Baxter feels that having Lego Lisa appear on her social media pages rather than her own image is a novel way to bring attention to the information she shares.

“We have a lot of new Extension agents. When I was at winter conference, they asked how many agents have five years or fewer experience and about half the room shot their hand up. (I created) Lego Lisa to reach that clientele. They’ll see things scrolling through their phone and she does provide a chuckle,” Baxter said.

David Allen, communications coordinator for the UGA CAES Office of Communications and Creative Services, believes Baxter’s creativity will serve her and UGA Extension well in relaying messages via social media.

“We love to see faculty embracing social media and finding creative ways to connect with constituents through the web. It will be fun to see the Lego Forage Specialist build its following and see the engagement generated across multiple platforms,” Allen said. 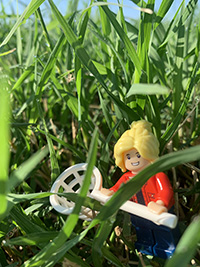 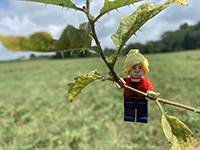