University of Georgia scientist Wayne Hanna has received his share of awards, but he says there’s something extra special about the Lifetime Achievement Award he received at the National Association of Plant Breeders (NAPB) annual meeting on Wednesday, Aug. 28.

“I think the biggest satisfaction that comes from winning the award is that the efforts in Tifton are recognized and acknowledged,” Hanna said.

Hanna has served as a part-time professor in the Department of Crop and Soil Sciences on the UGA Tifton campus since 2003. This followed a successful 32-year career as a research geneticist and research leader with the U.S. Department of Agriculture Agricultural Research Service (USDA ARS) in Tifton, Georgia.

Hanna, whose specialty is crop genetics and plant breeding, has authored or co-authored more than 670 scientific papers. He’s developed and released 31 cultivars and 35 parental lines, inbreds and improved germplasms of turf, ornamental and forage genera; this includes 27 plant patents and four plant patents in final review. His cultivars are planted across the world as forage for summer grazing and on landscapes, golf courses and athletic fields — including those staging the World Cup and Olympics.

Hanna was well deserving of the award, according to Jim McFerson, professor of horticulture at Washington State University and chairperson of the NAPB Awards Committee.

“For more than 50 years at both the USDA ARS and the University of Georgia, Dr. Hanna has assembled and distributed forage and turfgrass germplasm, developed and released highly successful turfgrass varieties, published hundreds of papers on breeding and genetics, and trained numerous graduate students and postdocs,” McFerson said. “Dr. Hanna is exactly the kind of scientist, mentor and human being the NAPB seeks to honor with its prestigious Lifetime Achievement Award.”

Over the past 16 years, he has developed seed sterile ornamental grasses, ornamental peanut, cold tolerant citrus, and coneless pine trees.

He has received multiple awards during his illustrious career, including induction into the Georgia Agricultural Hall of Fame in 2011 and into the Agricultural Research Services Science Hall of Fame in 2006. He was named Inventor of the Year by the UGA Research Foundation in 2003, the same year he received the C. Reed Funk Achievement Award from the Turfgrass Breeders Association.

These awards recognize his impressive body of work, but Hanna is most proud of the impact his career has made on consumers.

“Say, a lady calls me from north Atlanta and says, ‘Wayne, ‘TifBlair’ has given me the prettiest lawn I’ve ever had.’ That’s the best award you can get,” Hanna said. “Or you have a cattleman from Texas that says, ‘This grass that you developed has made me more money than anything I’ve ever done.’ Those are really good feelings.” 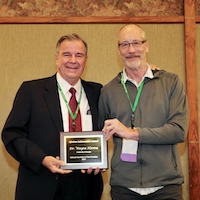