Katrien M. Devos, a professor of crop and soil sciences and plant biology at the University of Georgia, has been named a Fellow of the Crop Science Society of America (CSSA).

Her nomination and selection as a CSSA Fellow recognizes a career dedicated to breaking new ground in understanding the genetics and evolutionary biology of crops and in the search for more resilient and sustainable crop varieties. From mapping the genomes of orphan crops, like finger and foxtail millet, to tracking the genetic evolution of agronomic and wild grasses, Devos has played an integral role in the development of a more food-secure world.

The CSSA, the premier international scientific society for crop scientists and crop breeders, selects CSSA Fellows to recognize members for professional achievements and meritorious service. Only up to 0.3% of the society’s active and emeritus members may be elected as Fellows. Fellowship is the highest level of recognition offered by the society.

Since the program was established, 24 UGA professors have been selected as CSSA Fellows; four of them are still active in UGA agricultural research.

“Katrien Devos is one of the best researchers in the world in her field,” said Allen Moore, associate dean for research at the UGA College of Agricultural and Environmental Sciences (CAES). “She is very deserving of this honor and a standout in one of the nation’s top plant breeding, genetics and genomics programs. UGA agricultural research is known around the world as true leader in developing the tools and the scientific knowledge that will lead us into the next great chapter of agricultural advancement.”

The CSSA will recognize Devos formally when she travels to San Antonio, Texas, at the society’s awards ceremony this fall.

Devos continued her career at the John Innes Centre, where she was a pioneer in the field of grass comparative genetics. She was a driving force behind the development of the “crop circles” concept, which demonstrates the relationship between different grass genomes at the genetic level. She also studied millet as a food crop for the developing world.

In 1996, Devos received a highly competitive David Phillips Fellowship from the U.K.’s Biotechnology and Biological Sciences Research Council (BBSRC) to establish a fully independent research program in the U.K. As a BBSRC Fellow, she made landmark contributions to the field of comparative genomics and genome evolution.

She also continued her research on millet and was an integral part of a team — led by the International Crops Research Institute for the Semi-Arid Tropics — that developed the first pearl millet cultivar that was bred using marker-assisted breeding for improved downy mildew resistance. The impact of replacing older varieties with this downy-mildew-resistant, early-maturing variety has been estimated at more than $15 million per year.

In 2003, Devos joined the University of Georgia with joint appointments in the CAES Department of Crop and Soil Sciences; the Institute of Plant Breeding, Genetics and Genomics; and the Franklin College of Arts and Sciences Department of Plant Biology. At UGA, she established a broad research program that combines basic and applied research to a range of target crops including wheat, switchgrass, seashore paspalum and millet.

Devos was awarded the UGA Research Foundation’s Creative Research Medal for her work on orphan crops. She was also elected an American Association for the Advancement of Science Fellow in 2016. Devos continues to be a pioneer in the field of plant sciences through her cutting-edge research and passion for her work. 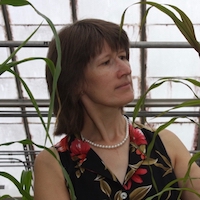