Before farm-to-table was trendy, scientists and University of Georgia Cooperative Extension personnel in Tifton were taking research from the lab to the farm.

That work is documented in “A Century of Impact: From Experiment Station to Campus,” a book published in recognition of the University of Georgia Tifton campus’ centennial. The impact spans 100 years of agronomic research and history, including rescuing the Southeast peanut industry from the death knell of disease; moving livestock production from subsistence to abundance; providing blueberry varieties to Jackie Onassis; and breeding turf for global venues such as World Cup soccer games.

Joe West, assistant dean at UGA-Tifton, organized the first efforts to create the centennial book in 2016, gathering input from Tifton faculty and staff on campus who conceptualized the book’s content. Three years later, the finished volume documents the influence of research, extension and academic programs offered in Tifton, dating back to when the campus was known as the Coastal Plain Experiment Station.

“When you think about the magnitude of a centennial celebration, which only happens every 100 years, I knew it was an opportunity we shouldn’t miss,” West said. "We wanted to produce a book that was consistent with how people read and view things today, so it is more picture oriented. I think documenting our history in a pictorial way was appropriate when you consider the in-depth impact that we have had on agriculture in Georgia and the world."

Opening with a foreword by President Jimmy Carter, the book is available at www.ugaextensionstore.com for $33, which includes shipping and tax. The 206-page, hardbound picture book chronicles the campus’ in-depth impact on Georgia and the world through research in agriculture, Georgia’s No. 1 industry.

The book highlights the opening of the experiment station in 1919 when Silas Starr was the first director; the eradication of the boll weevil and its impact on the cotton industry in the early '90s; the introduction of precision agriculture; and the advancements of genetics in plant production. Groundbreaking scientists like Glenn Burton, Wayne Hanna, Frank McGill, Peggy Ozias-Akins and Naomi Woodroof are featured.

“We hoped for a very good book. We got that and then some,” West said. “It exceeds even our highest expectations.”

Pam Golden Caraway, former editor of Southern Farmer magazine, volunteered her time as author. She has written about agriculture since 1985 and believes strong agricultural research at UGA-Tifton will continue to be essential for farmers and the world as the campus embarks on its next century of service.

“This book brings the work of the Coastal Plain Experiment Station — now the UGA Tifton campus — to the attention of those outside of agriculture. As we seek to tell agriculture’s story to a larger audience, it’s essential for all to understand that sound science propels agriculture ever forward in our quest to be environmentally and economically sustainable,” Caraway said.

West, who has worked at UGA-Tifton for 34 years, including 12 years as assistant dean, admits that he thought he knew a lot about the campus prior to the launch of the book concept in 2016. But the last three years have opened his eyes to the scope of the impact that the campus has had on the agricultural community.

“I feel like I know even more about this location, and I feel even more strongly about the people who came before us and their commitment and accomplishments,” West said. 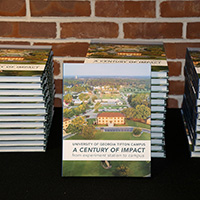