American and international students continue to be attracted to the dual master’s degree program in sustainable agriculture offered through a partnership between the University of Georgia Department of Crop and Soil Sciences (CRSS) and the University of Padova (UNIPD) Department of Agronomy, Food, Natural Resources, Animals and Environment (DAFNAE) in Italy.

The dual degree is a two-year program that allows students to earn two master’s degrees simultaneously while attending school at UGA and at UNIPD. Two students — Aaron Bruce of Lakeland, Georgia, and Samuele Lamon of Moniego Di Noale, Italy — graduated from the program this spring. They are the third and fourth students to graduate, respectively.

“Our limiting factor is funding to support the students. We have 12 students in the program now and we’re adding three more in the fall. The students are in all stages of completion. New students begin either at UNIPD or at UGA and then they go to the other university to conduct their research,” Vellidis said.

While students benefit from studying at two universities with leading agricultural programs, they also participate in research that has far-reaching implications.

In Italy, Bruce’s research focused on studying nitrogen levels in durum wheat, a popular crop grown in Italy for pasta. The research involved the use of sensors to help understand the uptake dynamic of the essential nutrients in the field. The objective is to avoid applying fertilizer where it isn’t needed and to maximize wheat protein production.

“During the experiment, we used spectral reflectance sensors to estimate crop growth or biomass during the growing season by directly measuring the amount of chlorophyll in the leaves, and yield and protein sensors during harvest to measure the yield and protein content of the wheat. These are all concepts that Dr. Vellidis teaches in his precision agriculture class,” Bruce said.

While at UGA-Tifton, Lamon studied with CAES plant geneticist Peggy Ozias-Akins. His project focused on adding late leaf spot disease resistance traits when crossing a cultivated peanut with a wild peanut. Multiple chromosomal segments from the wild species were identified using molecular markers, combined in different peanut lines and then tested in lab and field environments to see which reduced infection, sporulation and defoliation.

Lamon won first place in the master’s category in a centennial poster competition at UGA-Tifton on Friday, May 3.

Tifton, Georgia, native Logan Moore was the first student to graduate from the program in July 2018. He experienced two growing seasons while in Italy from May 2017 to July 2018. He studied the population dynamics of the brown marmorated stink bug and its damage potential to both kiwi fruit and cherries, crops grown in Italy.

“I would say it was an incredible experience. I was able to increase my knowledge on how research is conducted as well as gain an appreciation for the culture itself,” Moore said.

Moore is currently earning his doctorate at UGA and is working with CAES plant pathologist Tim Brenneman at UGA-Tifton.

Although the students originate from UGA and UNIPD in this program, they’re not all of American and Italian descent. According to Vellidis, a dual degree student studying on the UGA Griffin campus hails from Nigeria and one that started at UGA and is headed to Italy this summer is from Brazil.

“We have many international graduate students in our programs so we are not surprised that students from all over the world want to participate in the dual degree. It’s not something we thought about when we put it together, but it’s natural for it to progress this way as word gets out,” Vellidis said.

For more information about the dual degree, visit https://t.uga.edu/4Zs.

“To have the opportunity to earn two master’s degrees simultaneously from two prestigious universities was outstanding. I think it makes you a more marketable candidate for different job opportunities that you may be applying for as well,” Moore said 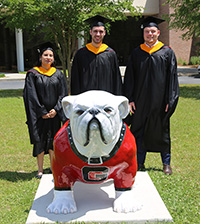