Growers can monitor for beetle activity by setting out traps and scouting for infestations, prioritizing trees in low-lying or flooded areas. If growers detect beetles and suspect tree damage, immediate action is required in order to save the tree. If trees are attacked, producers need to apply pyrethroids at the trunk of the tree. The more often a tree is attacked by the beetles, the less likely that tree is to survive an attack.

“Some farmers will spray around the perimeter of the orchard, in the area between pecan trees and the woods and maybe a few rows into the orchard. If you have 600 or 700 acres, it’s just not practical to spray the whole orchard,” said Tucker Price, Cook County Extension coordinator.

Some growers have taken preventive measures by spraying along border rows once beetle activity has been detected.

Trees that are most vulnerable are young and stressed, especially those under flooded conditions. Georgia’s increased rainfall this winter has left many south Georgia orchards susceptible to damage. Trees near wooded areas are also vulnerable because that is the beetles’ natural habitat.

“The trees that are really stressed are in low-lying areas and in standing water, primarily because their root systems are compromised, and trees undergoing such stress produce higher amounts of ethanol than healthy trees. Ethanol is what attracts ambrosia beetles,” Acebes said. “It’s a sign that trees are stressed.”

Producers can identify beetle activity by the toothpick-sized sawdust tubes the beetles leave sticking out of holes bored in pecan trees.

Acebes-Doria said beetles have been found in pecan orchards in Brooks, Cook, Crisp and Irwin counties.

Pecan producers are strongly encouraged to set out traps, which help to indicate when beetles are active.

Price has heard from several producers in Cook County who have seen beetle activity.

“(Acebes-Doria) came down to Cook County two weeks ago and I took her to an orchard where I already had two traps set out, so she could put out one of her traps. I checked a trap that was out there and I saw probably 50 hits on that one 3-foot log trap,” Price said. “It was unbelievable.”

One bright spot for Georgia producers is that spring is almost here. Once trees begin to leaf out, normally around late March or early April, the window for vulnerability decreases. Most trees are currently dormant but are preparing to produce leaves.

For more information about ambrosia beetles or any other pecan-related topic, visit https://site.extension.uga.edu/pecan/. 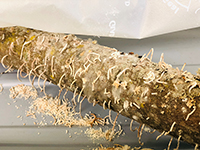