According to Lisa Baxter, University of Georgia Cooperative Extension’s newest forage agronomist, an unusually wet winter will cause problems with summer forage crop quality in Georgia.

Baxter, who started work on the UGA Tifton campus on March 1, expects to field her share of questions about forage management and quality concerns from Georgia producers this year.

“This year, with all the rain we’ve had, we’re going to see fertility issues, weeds and potentially diseases like we haven’t seen in a long time. It’s something that we’re gearing up and preparing for,” Baxter said.

Many of the issues facing forage producers will be discussed in greater detail at this year’s Georgia Forages Conference, held in conjunction with the Georgia Cattlemen’s Association Convention in Perry, Georgia, on April 4.

Because of south Georgia’s warmer climate and different soil types, the crops grown in Tifton, Georgia, and other south Georgia areas vary from what’s produced in more northern locations such as Blairsville, Georgia. For example, Bahiagrass is a long-lived perennial grass that’s grown in south Georgia but not north Georgia. Bermudagrass is used more extensively in the southern part of the state than in north Georgia.

Baxter believes that these warm-season crops will be impacted significantly by the excess rain experienced this winter.

“When Bermudagrass starts greening up, it’s may be struggling this year. We have already seen reports of warm-season weed species. It’s going to be competing with crabgrass and warm-season broadleaf species, and ryegrass is going to be hanging around with these cool, cloudy conditions. We are preparing for anything in the textbook that could potentially hit us this year,” Baxter said.

One problem producers have had in managing their crops this year was the use of preemergence herbicides. To combat the weed pressure in most fields, producers normally apply chemical treatments, but it was too wet for many farmers to get in the fields during the winter. If the treatments were not applied at the right time, weed pressure will be high this summer.

Baxter also expects the Bermudagrass stem maggot to be a problem again this year. Since first being discovered in 2010 in southern Georgia, the pest has damaged Bermudagrass hayfields and pastures throughout the Southeast U.S. If left untreated, Bermudagrass stem maggots can cause farmers to lose up to 80 percent of their yield during the peak season, which runs from late July to early September.

Baxter hopes to coordinate research projects in her new role so that growers will have additional options to combat this pest. “It’s a major problem throughout the Southeast. So much of our state’s hay production is Bermudagrass, so it hits Georgia a lot harder than other areas,” Baxter said. 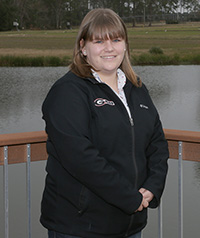