Clint Thompson is a news editor with the University of Georgia College of Agricultural and Environmental Sciences based in Tifton.
Authors:
Clint Thompson
Experts/Sources:
Adam N Rabinowitz 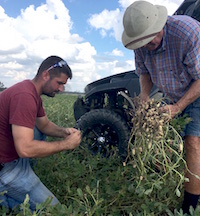 At-risk homeowners may forgo flood insurance Posted on 07/15/21 by Maria M. Lameiras
Fifteen million homes in the United States are at risk of flooding, according to the nonprofit First Street. And homes on the coasts aren’t the only properties at risk.

Free COVID-19 vaccine clinic to be held on UGA Tifton campus Posted on 07/06/21 by Maria M. Lameiras
The University of Georgia will hold a free COVID-19 vaccination drive-through clinic at the Tifton Campus Conference Center

UGA Extension to offer virtual solar energy seminar to inform rural Georgia landowners Posted on 05/20/21 by Chad Cain
University of Georgia Cooperative Extension is offering a new virtual seminar, “Solar Energy in Rural Georgia: Opportunities and Considerations for Landowners,” on Tuesday, June 8. The event is free and open to the public, but participants must register online.

Rebounding hospitality and food industry faces regrowing pains Posted on 05/19/21 by Maria M. Lameiras
After nearly 16 months, COVID-19 -related restrictions are lifting across the nation, breathing life back into the hospitality industry as people return to dining out in restaurants and traveling for both business and pleasure.
Subscribe for Updates