Chris Tyson, a University of Georgia Cooperative Extension agent for more than 10 years, has been named the new area onion agent at the Vidalia Onion and Vegetable Research Center in southeast Georgia.

The Vidalia Onion and Vegetable Research Center, located between Reidsville and Lyons in Toombs County, is home to specialized onion research conducted by researchers in the UGA College of Agricultural and Environmental Sciences (CAES).

Tyson has worked in onion research alongside past area agents Reid Torrance and Cliff Riner while serving as a UGA Extension agriculture and natural resources agent in nearby Tattnall County.

Tyson will continue the onion research being conducted at the Vidalia Onion and Vegetable Research Center, working with industry leaders to evaluate new varieties being released and sharing updates with growers.

“A lot of that foundation in research has already been laid for me. One of my biggest responsibilities will be managing the official Vidalia onion variety trial, which evaluates onion varieties each year for yield and grade and flavor. We’re responsible for making a recommendation on which onions should be called Vidalia onions and which ones don’t make the cut,” Tyson said. “It’s very exciting to be able to have this opportunity. I don’t take it lightly because it’s a critical position in Georgia. I look forward to trying to help the growers and work with the growers and the industry to continue to move forward and make sure we have sweet onions in Georgia.”

“Andre and I and some of the other county agents hope to do a research trial this year where we look at nitrogen management on some newer onion varieties,” he said. “We think we can reduce nitrogen use on some of the newer varieties and still make good onions. If we can reduce it to some degree, that’s good for everybody involved.”

Georgia onion producers started the planting season in early November, but due to heavy rains this fall, some growers are behind, according to Tyson. The extremely wet conditions have kept farmers out of the field, and planting could be stretched into January this season, he said. 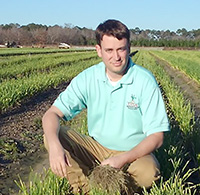