With the advent of CRISPR technologies and other precise genome editing methods, it has become faster and easier for crop scientists to breed new varieties. But there are still a few technical roadblocks that need to be overcome.

Supported by a $500,000 National Science Foundation grant, University of Georgia researchers plan to dismantle some of those roadblocks in the next few years.

UGA Department of Crop and Soil Sciences Professors Wayne Parrot and Jason Wallace hope to develop new tools to insert multiple traits into a plant’s genome at one time. Currently, when researchers insert multiple genes simultaneously, the genes tend to generate “cross talk” among their signals and degrade the expression of each trait.

“It’s like trying to have a conversation on your phone while standing next to five other people all doing the same thing,” explained Wallace. “What we need is a way of separating the signals so each gene can have its own conversation and not worry about what’s going on around it.

“Biotechnology is a powerful tool for both research and for creating more sustainable and resilient crop varieties,” Wallace said. “We’ve made amazing progress, but the tools we have just aren’t enough to meet the enormous challenges we’re facing. The more we can expand that toolbox, the better we can address these challenges.”

Almost all plants have evolved to avoid cross talk between genes by maintaining large spaces between the genes in their genome. Parrot and Wallace are turning to one of the few plants that has evolved a tightly-spaced genome — the carnivorous, aquatic weed bladderwort (Utricularia gibba) — to find out how to put multiple genes close together without interference.

Bladderwort is an ideal plant to use for this problem because of its very small genome. The bladderwort genome contains just 82 million letters of DNA. This is 40 times smaller than the human genome and much smaller than most crop genomes. While the genome itself is physically smaller, it contains the same number of genes as other plants. This means that bladderwort genes are packed very close together and still avoid signal interference between the genes.

Researchers think that bladderwort genes stay independent of each other because of the short “insulator” sequences that lie between them. Insulators are thought to exist in most plant genomes, but they are hard to find.

By looking at the small bladderwort genome, Parrott and Wallace expect to zero in on these key sequences relatively quickly. Once found, researchers will be able to use these sequences to put genes close together without their signals bleeding into each other. Finding these sequences in bladderwort may even be useful for identifying similar sequences in other, much larger genomes, like rice or wheat.

Once discovered, all of this information will be made public through the searchable Addgene vector database so that other researchers can use it. The grant period will run from 2019 through 2021, but Wallace said that some parts of the project are already underway. 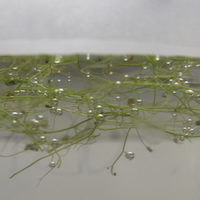 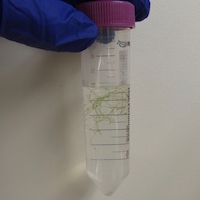