By Andrew Sawyer for CAES News

The Georgia Forestry Commission estimates that 2.4 million acres of timber were damaged by Hurricane Michael. This equates to $763 million in direct losses.

In Georgia, 300,000 acres, or approximately 16 percent of the state’s timber, were classified as being catastrophically damaged. An estimated 1.4 million acres or 61 percent were deemed moderately damaged. As of now, there are an estimated 37.68 million tons of timber on the ground. Now comes the hard part — salvaging what’s left.

Given market conditions, growers are in no rush to salvage moderately damaged stands. Also, with temperatures getting colder and dropping below 40 degrees, a potential frost will slow bark beetles, a common pest. Producers only need to salvage in severe and catastrophic cases.

University of Georgia Cooperative Extension offers a few tips to consider when assessing timber after storms:

When salvaging, pay more attention to what is still standing than what is on the ground.

Assessing your timber damage is critical to saving time and money. Timber is a valuable industry in Georgia. According to the UGA Center for Agribusiness and Economic Development, timber generated $681 million in farm gate value in 2016. For guidance on how best to salvage timber, contact your local Extension agent at 1-800-ASK-UGA1. 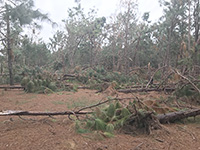 CAES News
Are your trees boys or girls — or both? Posted on 10/18/21 by Kim D. Coder
Female flowers and female trees produce fruit and seeds. Male flowers and trees produce pollen. Making the correct choice of tree gender can be important. Anyone who has ever smelled putrid ginkgo fruit, washed mulberries off their car or sneezed at tree pollen should understand.