“If producers properly rotate the chemical ingredients (used in the different fungicides) that treat for downy mildew, this will help our chemical classes be sustainable for years to come,” Brannen said. “We have already essentially lost one of our fungicides — the quinone outside inhibitors (Qol) — and we simply can’t afford to lose more classes if we are to manage this aggressive disease in the future.”

According to Brannen, downy mildew diseases are readily observed on leaves of susceptible vegetables, fruits and ornamentals. The downy mildew that impacts grape production is caused by the water mold Plasmopara viticola. In addition to reproducing on the underside of grape leaves, it infects and reproduces on young berries and pedicels. Early infections rot the fruit directly, whereas leaf infections result in defoliation — reducing photosynthesis and resulting in poor quality fruit that would produce unpalatable wine.

In a research project conducted with UGA College of Agricultural and Environmental Sciences graduate student Sarah Campbell in 2017, Brannen studied the resistance effect of downy mildew in multiple Georgia counties, including Cobb, Colquitt, Fannin, Gilmer, Haralson, Rabun and White. In all but Colquitt County, 100-percent resistance to Qol was recorded.

Resistance develops over time as one application of the same chemical ingredient is applied repeatedly to the same crop. In some vineyards in Georgia where downy mildew is extremely challenging, growers may apply fungicide as many as 17 times.

“Because of the numerous applications of oomycete-active materials, resistance can readily develop to different chemical classes utilized to control downy mildew,” Brannen said. “Spraying fungicides with the same single-site mode-of-action active ingredients repeatedly selects for individuals who are less sensitive to those fungicides. These less sensitive individuals and their progeny remain the in the vineyard and cause significant disease damage, often as if no fungicide had been applied at all.”

In addition to downy mildew resistance field surveys, UGA researchers evaluated the effectiveness of eight different fungicides and two combinations of fungicides on grapes at the UGA Research and Education Center in Blairsville, Georgia, and two commercial vineyards. Downy mildew from these sites showed high resistance to the Qol fungicides azoxystrobin and pyraclostrobin.

Georgia’s grape industry has grown significantly over the past 15 years. Georgia vineyards are located mostly in the Valley and Ridge and Blue Ridge regions of north Georgia and in the Piedmont region of west Georgia. Wine grapes contribute to the Georgia economy, although acreage is relatively small compared to that of North Carolina and Virginia. According to the UGA Center for Agribusiness and Economic Development, the farm gate value for grapes in 2016 was $20.4 million.

Hybrid grapes are also being produced in the southern Coastal Plain region. However, they too are susceptible to downy mildew disease.

“I would say that downy mildew may be the most difficult-to-control disease in Georgia grapes, and this is true for most, if not all, of the Southeast,” Brannen said. 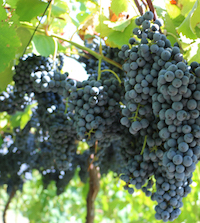