Fueled by warmer-than-normal temperatures, summer thunderstorms blanketed the state this June, producing heavy rain and flooding in some areas while leaving other areas dry.

The wet conditions early in the month forced some farmers to switch from peanuts to soybeans or cotton. As things dried out later in the month, farmers hurried to get their last crops in the ground and spray for weeds and fungal diseases whenever the rain allowed.

Hay showed strong growth from all of the rain and the increase in sunshine from May’s cloudy conditions, and producers worked hard to harvest it during the drier periods. The wet weather also caused some problems with wheat sprouting, reducing quality and prices.

While the thunderstorms did not spawn any tornadoes, high straight-line winds were reported on June 20. Some of those were isolated incidents, but many covered significant swaths of the state. Hail was observed on three days but was mostly small in size.

Sadly, a Texas teenager died when a June 25 storm caused a tree to fall on a tent at a Boy Scout encampment in Newton County, Georgia.

Despite the heavy rainfall in some areas of the state, some counties in the southern half of Georgia received less than their normal rainfall, but no drought or abnormally dry conditions were reported.

The highest monthly total precipitation recorded by a National Weather Service station was 7.28 inches in Athens, Georgia, 3.1 inches above normal. The lowest was in Savannah, Georgia, where the station recorded 2.57 inches, 3.38 inches below normal.

One precipitation record was set on June 24 when Augusta received 1.57 inches of rain, breaking the old record of 1.35 inches set in 1884.

The highest daily rainfall total was reported by a Community Collaborative Rain, Hail and Snow Network (CoCoRaHS) observer was 7.75 inches near Sautee Nacoochee, Georgia, in White County. This rain fell on the afternoon and evening of May 31, but was properly reported as a 24-hour total on the morning of June 1. A lot of local flooding was seen with this downpour.

The Sautee Nacoochee observer also had the highest monthly total with 12.33 inches reported. It was followed by 12.08 inches measured at Winder, Georgia, in Barrow County and 9.24 inches in Ringgold, Georgia, in Catoosa County.

The outlook for July shows that warmer and wetter conditions are likely to continue, although cooler temperatures may return later in the month. For the July through September period, the climate predictions continue to lean toward above-normal temperatures. Precipitation forecasts show equal chances of above, below or near-normal rainfall due to the expected switch from neutral to El Nino conditions later in summer. This could help suppress the development of tropical storms in the Atlantic Basin.

For more information, see the Climate and Agriculture in the South East blog at site.extension.uga.edu/climate/. Email pknox@uga.edu to share your weather and climate impacts on agriculture on the blog. 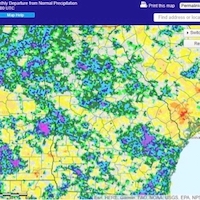