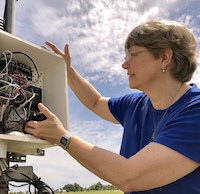 CAES News
Cold protection options for growing fruit and vegetables throughout the winter 01/11/23 Emily Cabrera
Whether you’re a home gardener or a production farmer, Georgia’s mild climate allows for a variety of fruits and vegetables to be grown throughout the year. However, with erratic weather events and broad temperature swings during the winter and early spring months, having a few cold protection resources on hand can help you weather the unpredictability.
Subscribe for Updates