Pepper weevils are such a threat to Georgia’s pepper crop that University of Georgia vegetable entomologist David Riley says Georgia farmers and agricultural workers should immediately kill any weevils found on fruit, equipment or clothes.

This year’s cold winter temperatures helped to wipe out fall vegetable plants like peppers and eggplants that host the weevils. However, weevils can hitchhike on peppers that the U.S. imports from Mexico and infect Georgia’s pepper fields. Seventy percent of the winter peppers imported into the U.S. are grown in Mexico, where pepper weevils originate.

When these Mexican-grown peppers arrive in stores, they could have grubs or adults inside them.

“When the peppers are cut open and the seed cavity is cleaned out into the trash bin, you might put live weevils into the trash bin that could eventually get out and infest new fields of peppers,” Riley said. “If you bring infested fruit to a new field and discard it, you can start a new infestation in that field.”

Riley stresses that even a small percentage of weevil-infested fruit can lead to an infestation.

He and fellow UGA College of Agricultural and Environmental Sciences entomologist Stormy Sparks are raising awareness in producers and agricultural workers who may inadvertently bring weevils into fields.

“Even though this may be an innocent act, it can result in major losses to the vegetable farm and could have easily been prevented with a small amount of awareness and good sanitation practices,” Riley said. “If you see them, kill them. If they’re coming in through produce, and if the people who are handling the produce see these things, they just need to kill them, mash them, and don’t let them get out.”

According to Riley, hot peppers are the most vulnerable.

“In the field, the weevil’s impact can be devastating. It’s like the boll weevil was to cotton. The pepper weevil comes in the field and starts laying eggs. If it’s early in the season, they’ll cause the blooms to drop,” Riley said. “The pepper plant’s defense is to shed fruit, just like the cotton plants started shedding bolls. If it’s a heavy infestation, you can get 90 percent yield loss. It will just wipe out a field.”

Managing pepper weevils is difficult because pyrethroid pesticides are no longer effective. The weevil has built up a resistance to the pesticides and, once inside the fruit, they are not affected by insecticides.

According to the UGA Center for Agribusiness and Economic Development, the 2016 Georgia farm gate value for bell peppers was over $112.9 million. 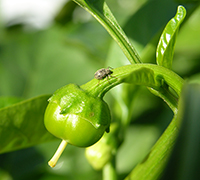 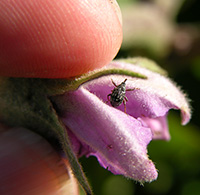