In terms of heat, February in the Southeastern U.S. set records, so the swing to lower-than-normal temperatures in March came as a shock to many.

Only a few temperature records were set last month.

No daily precipitation records were set last month. The only snow reported was 0.2 of an inch at the Dillard, Georgia, Community Collaborative Rain, Hail and Snow Network (CoCoRaHS) station in Rabun County on March 7.

The highest daily rainfall total recorded by CoCoRaHS volunteers in March was 3.72 inches, recorded near Morganton, Georgia, in Fannin County on March 1. Observers north of Ellijay, Georgia, in Gilmer County and Helen, Georgia, in Habersham County received 3.67 and 3.66 inches, respectively, on the same day.

For more information, visit the Climate and Agriculture in the South East blog at https://site.extension.uga.edu/climate/, the Southeast Ag Climate Facebook page or @SE_AgClimate on Twitter. Share your weather and climate impacts on agriculture on the blog by emailing them to pknox@uga.edu. 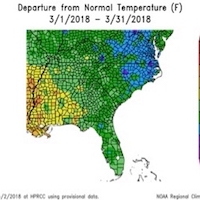